Shattered Souls by Mary Lindsey
December 8, 2011; Philomel/Penguin
*I received a free copy of this book in exchange for an honest review 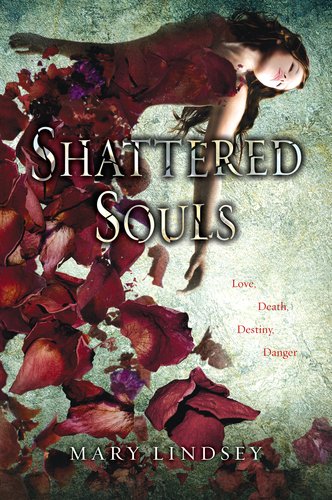 Lenzi hears voices and has visions - gravestones, floods, a boy with steel gray eyes. Her boyfriend, Zak, can't help, and everything keeps getting louder and more intense. Then Lenzi meets Alden, the boy from her dreams, who reveals that she's a reincarnated Speaker - someone who can talk to and help lost souls - and that he has been her Protector for centuries.

Now Lenzi must choose between her life with Zak and the life she is destined to lead with Alden. But time is running out: a malevolent spirit is out to destroy Lenzi, and he will kill her if she doesn't make a decision soon. (courtesy of Goodreads)


Shattered Souls is a slow burning book. You start out intrigued but unsure, then change to interest and entertainment, finally evolving into love and fascination. Shattered Souls is a story of reincarnation, ghosts both good and evil, friendship, love, betrayal and altruism.

The first third of Shattered Souls I kept thinking "haven't I read this before?" And, in essence, I have. There are numerous YA paranormal romances with a reincarnated girl and her male guide/love interest. But Shattered Souls distinguishes itself with the shape of its paranormal element took. Lenzi was once Rose, a famous Speaker. She ambitiously and heartlessly worked to bring troubled souls to peace and to eliminate the evil spirits. She kept Alden, her Protector, on a tight leash in order to advance her cause. Now Lenzi is thrust into the role of Speaker with no memory of what to do. Alden is leading her rather than the other way around.

I loved Lenzi. She doesn't start out overly confident or forthright. I like reading books about girls who don't have the best self-esteem and aren't quick to act, because I was that way as a teen. She's terrified that she will suffer the same fate as her schizophrenic father. And when she first starts hearing the voices of the spirits, it seems like she's going crazy. I liked how Lenzi evolved throughout the book. She did not immediately believe or embrace her role as Speaker. She wasn't sure of her actions, but as she saw the difference she was making and the consequences of not acting, she became a bold and determined girl. I like my cautious Lenzi and I like my brave Lenzi.

Alden was another character I really liked. He was utterly devoted to his job as Protector as well as Lenzi. He even managed to add in a cute 4 year old little sister. He was content to let Lenzi lead and made sure that he only helped not hindered her. The more we learn about Rose and Alden's past, the more terrible we feel for him. He is a genuinely nice person, someone who toes the line even at his own expense. It's hard to see his heart get stomped on, life after life.

The romance developed at a good speed. There was instant intrigue, but not instant love. Lenzi was devoted to her boyfriend Zak, who seemed like a nice guy, but had a scary dark side. The relationship between Alden and Lenzi grew out of shared experience and respect. Lenzi came to know Alden through his present-day acts and his past heartache. It's hard not to fall for a sweetheart who adores you and treats you like a queen.

The plot of Shattered Souls is not particularly original, but it's enjoyable nonetheless. I really liked how Lenzi was able to help good souls come to rest. Most paranormal novels feature the characters destroying evil. Shattered Souls does that as well, but there is a large element of altruism to Lenzi's role as Speaker. Ultimately, the plot was less important to me than the characters. The story steadily grew on me as I read it and by the time I closed the last page, I was devastated. I wasn't as interested in knowing what was going to happen next in the story; rather, I was sad that I had to leave two people who I now considered friends. I recommend Shattered Souls for an interesting plot, but mostly for its kind and passionate main characters, Lenzi and Alden.