*Spoilers: I've tried not to give away any blatant spoilers - not like there are any if you've read the book - but since I describe scenes from the movie, you might want to avoid them if you're wary of spoilers.

I've established a pattern with the Twilight movies. I see each movie on the day it's released. I leave the theater feeling a mixture of happiness and disappointment. Then I take a day or two to process my "grief," as it were, over things the movie omitted or screwed up and watch the film again. The second time, I'm ready to accept the movie for what it is and I love it.

Breaking Dawn broke my Twilight movie trend. It is the first movie of the series that I loved on the first viewing. I was so impressed. Like all the Twilight movies, I don't see this one winning an Oscar any time soon and there were still a few occasions where I was laughing at the movie rather than with it, but overall it was very well done. It's particularly impressive considering that Breaking Dawn is the book in the series that I, like most readers, have the most issues with. In some ways, the movie was easier to handle than the book.

Breaking Dawn is clearly separated into four different acts: Wedding, Honeymoon, Pregnancy, Birth/Death/Transformation/Imprinting. With so much going on, I was impressed with how well paced the film was. It didn't feel as choppy as some of the previous movies. Neither did it drag enough that I felt compelled to look at my watch. Each scene developed the plot enough so that we knew what was happening and then it moved on.

A wedding is such a fun, happy time that it's hard to screw up. The movie did a great job showing Alice and Renee's excitement, Charlie's reticence, Rosalie's attempted kindness, and Bella and Edward's nervousness. I did miss the scene from the book where Charlie accused Alice of sticking him with a needle, but you can't have everything.

Edward, being the worrywart that he is, thinks that Bella might change her mind if she knew everything about his past. This leads into a flashback scene of Edward's years as a vigilante, human-drinking vampire - which was omitted from the first film. Very well done flashback. I loved the costumes, the colors, and the suspense of the hunt.

The wedding vows were simple and sweet. Very touching. I loved the toasts. With the exception of Edward's well-spoken words, they were really cheesy. Roll your eyes cheesy. But I laughed at them in the same way that I laugh at bad jokes.

Love the dress. It was so simple in the front but had a gorgeous, complicated lace back. It's refreshing to see something other than the ubiquitous strapless gown. I think it looks more elegant than what Stephenie described in the book. 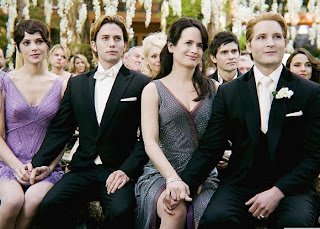 Alice, Rosalie, and Esme's dresses were gorgeous. I loved the twenties influence yet they still managed to look modern and elegant.

My only qualm was that I hated Alice's hair. I'm glad they finally cut her hair as short as I envision it being from the books, but I didn't like the slicked back look. I think pin curls would have been better for the twenties feel. But I suppose that could have looked really bad as well. I'd rather have the spiky look from the books.

Perfectly captured the book. Romantic, sexy, and tasteful. Of course the sex scene is one of the main things people were waiting to see. I liked that they pushed the limits of what they could show, but it didn't cross the line into being voyeuristic. Lots of close-ups on Bella's face. It wasn't one of my favorite scenes in the movie because I'm not that into watching other people have sex. Just doesn't do it for me. So my main reactions during the scene were "Geez...I'd kill for Bella's eyelashes" and "Rob has some odd scars/birthmarks on his back."

I think the best - and most real - scene during the Honeymoon was Bella's human moments. It perfectly showed a young girl's nervousness and amusing attempts at primping prior to a big moment with a boy.

The movie also does a good job of showing the aftermath of the sex scene - feathers, destruction, bruises, and how Edward manages to totally kill the mood. Perfect reflection of the novel. I liked how he kept pushing Bella to do anything other than sex. Especially chess.

The pregnancy portion of the movie follows the book pretty well. We see a lot from Jacob's perspective, although not as much as was in the book. That's fine with me. I'm happy with less Jacob.

What stood out to me here was emaciated Bella. Wow, she looked horrible. I wonder how they did it. She looked like she was starving to death. It was very disturbing.

Rob did a good job expressing how upset and scared Edward was. It was some of his best acting in the series. It was interesting seeing the change in his personality as the fetus evolved into a baby in his eyes.

Very gory. They pushed the limit on PG-13 even more here than in the sex scenes, it seemed. I had to look away. Kristen does a great job at playing someone who is in unimaginable pain and then someone who is essentially dead. Rob also did a great job at portraying Edward's anguish. Like the emaciated Bella, this scene was not only graphic, it was very disturbing. But in the way that it should have been. They did a great job translating this from book to film.

I loved how the transformation was portrayed. It is something that is very hard to convey, but I think how they did it made a lot of sense. The only problem I saw with it was that I didn't think it fully conveyed how much pain Bella was in - although it did a little. I also liked seeing Bella's physical change - how her body fills out and her hair changes. I'm excited to see the full transformation in the next movie.

Jacob's imprinting is a hard concept to come to terms with, in the book or the movie. I thought the movie did the best it could at showing it. I liked the set up throughout the movie - to explain what imprinting is and to get the idea across that it is not purely sexual. The film didn't do this perfectly, but neither does the book. The viewer (or reader) still has to take a leap of faith in assuming that Jacob doesn't really feel that way about a baby.

I can't decide whether the actual moment of imprinting was done well. It obviously made sense to me. It probably would make sense to a non-reader, but I'm not sure. They announced it just to be clear.

There are a couple of fight scenes between the Cullens and the wolves that weren't in the book. I loved them. These are things that didn't happen, but are entirely in line with what could have happened. It makes for some great action and allows the Cullens to show off their skills.

There are always some moments in the Twilight movies that are dumb, but only two things really stick out to me as being bad:

1) The wolf voice-overs: I get that it's hard to show the wolfpack conversing while in canine form. They did it by having voice-overs as the camera focused on a wolf's face. By itself, this would be only mildly cheesy, but instead of using the character's normal voice, they transformed each voice into a loud, dark echo. It sounded like the wolves were having a Darth Vader impersonation contest.

2) Carlisle's Costume: Oh. My. Gosh. What were they thinking? It seems like one character in each movie has his or her turn at looking awful and this time it was Carlisle. He looks horrible. To start with, there's the wig. His hair has been fine in the previous films. Couldn't they use the same wig? He looks like he has a bad comb-over. It ages him a dozen years or more. Not only that, but the sweaters they put him in make him look like he's gained twenty pounds. Perhaps Peter did gain a little weight, but it doesn't seem like it from the interviews I've seen him in. I think it was just bad wardrobe choices. The costume designers seem to forget that physically Carlisle is only 23 years old. Since Peter is in his mid 30s, they don't need to go out of their way to make him look even older.

Have you seen Breaking Dawn yet? What did you think?
Posted by Alison Can Read at 1:52 PM