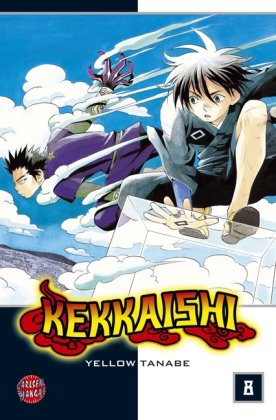 A modern-day Romeo and Juliet, skilled in the art of the "kekkaishi," fight against their families' bitter rivalry and a gaggle of monsters and ghosts on the loose!

By day, 14-year-old Yoshimori Sumimura is just a regular kid going to junior high school, but by night he is a "kekkaishi," or demon-fighter who specializes in generating magical barriers around his prey before making them disappear. His neighbor is 16-year-old Tokine Yukimura, who is also a kekkaishi! Together they share the knowledge of their ancient art and their nights battling beings from the netherworld. Sounds fun, but their families don't get along, because each believes themselves to be the "true practitioners" of the art of the kekkaishi.

With the help of their new kekkaishi-in-arms Gen, Yoshimori and Tokine battle the Dark Watchtower, a mysterious cabal of hideous ayakashi demons, to defend Yoshimori's ancestral lands! But the three friends are badly outnumbered, and when Gen's fury causes him to go too far, they may lose him forever--in more ways than one...(courtesy of Goodreads)

This volume has it all. Action, anger, sadness, and moments that make you go "aww..." It starts off right where volume 7 ended. Tokina and Yoshimori are in the middle of an epic battle with demons wearing human skins. Gen is injured and being held hostage by the demons. The kids are definitely in over their heads, but they hold up surprisingly well.

While Tokine and Yoshimori fight, Gen tries to summon his strength. He is half ayakashi (demon) and can bring out his demon nature by force of will. But that is strictly forbidden and he is caught by a member of the Shadow Organization. Even in the middle of a battle, Gen isn't allowed to turn himself into an ayakashi.

This leads us to Gen's backstory. It's a critical part of the series, I think, because it illustrates the characters of Gen as well as Masamori (Yoshimori's brother). I am now fond of both people. Gen lived a quiet life with his family - his sister and brothers. For years, Gen bore the brunt of his brothers' bullying, but when his ayakashi nature developed, Gen lashed out. Gen didn't want or mean to hurt people, but he couldn't control himself. Eventually, he nearly killed his beloved sister. He was sent away to the Shadow Organization - a unique home for wayward boys. There, Masamori took him under his wing, believing in him when no one else would. I understand why Gen worships Masamori now.

The volume closes with some interesting moments illustrating Masamori's intelligence and keen political sense. As the newest member of the Shadow Organization's executive committee, he is ambitious to make changes to the group, but is first positioning himself to have the power and authority to do so. Then we get to see a cute seen building Tokine, Yoshimori, and Gen's friendship/partnership. I'm excited to see what the trio will be up to next.
Posted by Alison Can Read at 12:40 AM