Please welcome Megan Bostic, the author of Never Eighteen, to Alison Can Read!

Austin Parker is on a journey to bring truth, beauty, and meaning to his life.

Austin Parker is never going to see his eighteenth birthday. At the rate he’s going, he probably won’t even see the end of the year. The doctors say his chances of surviving are slim to none even with treatment, so he’s decided it’s time to let go.

But before he goes, Austin wants to mend the broken fences in his life. So with the help of his best friend, Kaylee, Austin visits every person in his life who touched him in a special way. He journeys to places he’s loved and those he’s never seen. And what starts as a way to say goodbye turns into a personal journey that brings love, acceptance, and meaning to Austin’s life. (courtesy of Goodreads)

1. REM in the late 80’s at the Pantages Theater in Seattle. This one was awesome. It was before they were huge and it was a pretty small venue. We even saw Peter Buck walking down the sidewalk before the show.

2. The Police, 1982, Ghost in the Machine tour. This was my first concert. I was twelve. Huey Lewis and the News opened for them, which was weird. I was at the very front nothing but a barrier between me and Sting. I had the hugest bruise on my hip the next day from being crammed up against the barrier. It was worth it though.

3. The Monkees, this year. I’ve seen the Monkeys three times, but the best by far was the one I just went to a couple months ago. My sister and I bought VIP tickets. We were second row, center stage. They sound the same as they always have and played old videos in the background. Afterward we got to meet them and get our pictures taken at a reception.

4. Joe Jackson, Paramount Theater, Seattle, 1989. This was probably one of the most amazing concerts I’ve ever seen. Very small venue, and it just felt personal, like he was singing just for me.

5. Maroon 5 with One Republic, last summer. I had no idea One Republic was opening for Maroon 5 so it was a big surprise. These are two of my favorite new bands.

6. Madonna with Beastie Boys, Paramount Theater, Seattle, 1985. This show kicked off Madonna’s debut concert tour. Poor Beastie Boys. I loved them, but they were getting boo’d. I mean, was it really a good idea to pair these brand spanking new rappers (they were more than likely teenagers, License to Ill would not release for another year) with the Material Girl?

7. Lenny Kravitz, Fox Theater, Portland, Oregon, 1991. This venue was tiny, and Lenny ROCKED!! His opening act did too, can’t remember her name. His then wife, Lisa Bonet, was lingering in the shadows.

8. Police, Fixx, and Thompson Twins, Tacoma Dome. Now, everything I’ve read says this was 1983, but to me it seemed late. Won’t argue with the net though. Ultimate 80’s concert. I should mention I’ve seen The Police in concert about, hmmm, four or five times, and Sting 3 outside of that. They were my favorite band for a long time.

10. Now, for one concert I would LOVE to see but haven’t yet, probably one of my favorite artists of all time . . . Eminem. I love him. I’d like to go on a date with him. Not sure he’d have me though.

To Enter: Leave a comment about the best concert you've ever attended - or if you haven't been to one, the one you'd most like to attend. Plus an e-mail address, of course 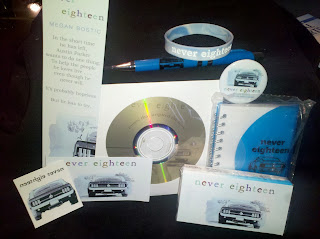 -Contest ends November 12 at 10 PM PST
-Winners will be chosen at random through Random.org
-Open internationally
-You must be 13 years or older
-Alison Can Read is not responsible for items lost or damaged in shipping.
Posted by Alison at 12:00 AM