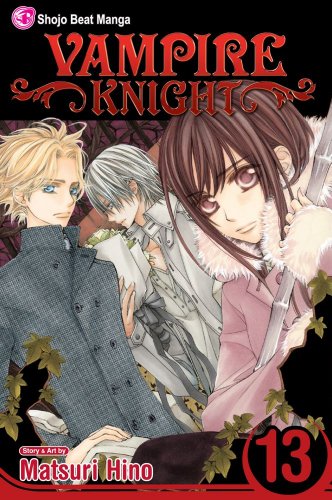 Yuki is attacked by another pureblood outside a graveyard for meddling in the ways of the vampire society. Injured, she returns home to Kaname, who shares with her his past memories and the truth behind the Kuran family.(courtesy of Amazon)

Volume 13 of Vampire Knight is the most confusing volume to date. I had to read it twice to even begin to understand it. By the end of my second go round, I was quite fond of the story and the characters.

We learn a lot more about Kaname in this volume. He shares his memories with Yuki and she essentially lives his past. I am not the rabid Team Kaname fan that I was at the beginning of the series, but I don't hate him either. This volume shows that he is a much more complicated character than I realized. It was nice to see him doing something other than trying to clip Yuki's wings. Plus, he has had a very sad and lonely life.

The themes of this volume appear to be loneliness and loss. Because that's what you see with Zero as well as Kaname. Zero visits his brother's grave for the first time. He's despondent over the loss of his brother and is also worried that he will lose every shred of his humanity.

Turns out Zero was in the right place at the right time - Yuki and Aido happen to be in the same cemetery and run into a dangerous vampire who attacks Yuki. Zero saves Yuki's life. There are no romantic moments between them, but there are some great passionate drawings showcasing the chemistry between the characters.

The only light moments in this volume (and in the series in general) comes from Aido. Even in serious moments, it's hard to take Aido seriously. He's a loyal lapdog for whom things never go quite right. It's nice to have a bit of levity.

I'm curious to see where the next volume takes us. While I like the sophistication of the series, I wish Hino could structure it so that it was easier to comprehend.
Posted by Alison Can Read at 12:36 AM