Voice Over! Academy by Maki Minami 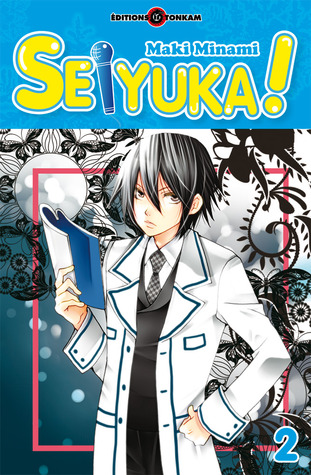 Kino Hime is a 15 year-old girl who just started her first year in a high school for voice actors (Seiyuu) called Hiiragi Academy. She dreams of becoming the voice of the main character in one of the most popular series in Japan, "Magic Fighter Lovely Blazers". The academy is the number one school which allows students to make their voice acting debuts and also includes other departments such as general education, sports, music, acting, and art.

Of course this Academy is full of celebrities, too. Two of Hime's upperclassmen are none other than the two rising idols of the group "Idol Unit AQUA".

But Hime's dream is hard to fulfill. Her voice is not really suitable for a voice actress and her new classmate Kudou Senri doesn't waste time in pointing that out. Will Hime prove everybody, especially Senri, what she is capable of despite the first appearance? (courtesy of Goodreads)


Shoujo manga has a formula and woe be unto any who dares to stray from the formula. I like Voice Over as a series, but it is so cliched.

Hime is basically your typical hardworking, plucky Japanese girl who doesn't feel like she's worth a damn, despite the fact that she's clearly talented. I suppose one thing that makes her different than other manga heroines is that she isn't preternaturally good at exactly what she wants to do. She wants to be a fancy princessy superhero-ish anime voice. She does not have the talent for that. She is indeed talented as a voice over artist, but it's as the raspy, chain-smoker, guy's voice.

The most interesting part of this volume was the relationship between Hime and her mother. Hime is the imperfect, unwanted child. Her sister is a gorgeous model. Her mother wants nothing to do with her, thinks Hime is a complete failure, and doesn't flinch when Hime moves out. It's quite sad.

I wouldn't say that I love Voice Over, but it's definitely something I want to continue. I could see it becoming quite addicting after awhile.