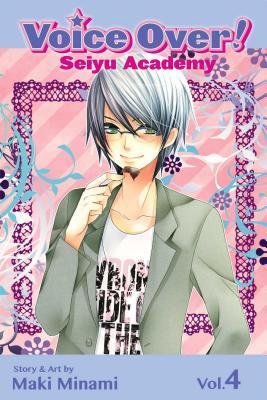 Hime Kino's dream is to one day do voice acting like her hero Sakura Aoyama from the Lovely Blazer anime, and getting accepted to the prestigious Holly Academy's voice actor department is the first step in the right direction! But Hime's gruff voice has earned her the scorn of teachers and students alike. Hime will not let that stand unchallenged. She'll show everyone that she is too a voice acting princess, whether they like it or not!!

After days of grueling training at Yamad's special voice acting retreat, Hime can finally bring forth her prince voice! Now she's ready to start her next job as a recurring character in an exciting new anime. But her first day on the set doesn't go as she'd hoped. Why do her costars and the producers seem to hate her when they just met her?! (courtesy of Goodreads)


This is such a silly manga series. I debated whether to continue for the first few volumes, but four volumes in, I'm now hooked. It's nothing that is going to win awards, but I enjoy having a fun series to laugh at and enjoy.

In this volume, Hime has a real job. She is playing a cat who is a kind of talking side kick to the main character. She comes into work all excited for her burgeoning career only to realize that everyone there hates her. She only got this position because the main character actor insisted that she be given a role. Still, she is determined to succeed and find a way to please.

What I liked is that they didn't just dislike her because she'd been pushed upon them. They were frustrated that she couldn't act very well. So at least Hime was being criticized for a reason. Instead of Hime charming her supervisors into liking her, she used that criticism to become a better actor.

There were some cute scenes between Senri and Hime. She is still visiting him in disguise. They bond over his love/obsession with cats. Lucky for Hime, her cat observing session helped her improve her acting and keep her job. I'm curious to see how the Senri/Hime relationship develops. Right now, it looks like it's going to be a very, very slow growth. Caterpillars can move faster. Guess we're in for a long series.