Not in the Script by Amy Finnegan 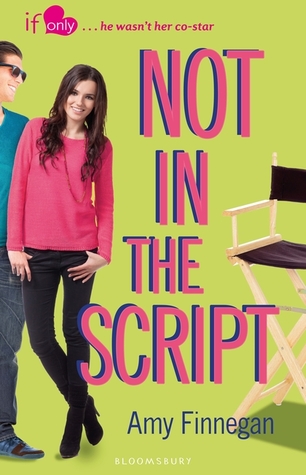 Not in the Script by Amy Finnegan

Millions of people witnessed Emma Taylor’s first kiss—a kiss that needed twelve takes and four camera angles to get right. After spending nearly all of her teen years performing on cue, Emma wonders if any part of her life is real anymore . . . particularly her relationships.

Jake Elliott’s face is on magazine ads around the world, but his lucrative modeling deals were a poor substitute for what he had to leave behind. Now acting is offering Jake everything he wants: close proximity to home; an opportunity to finally start school; and plenty of time with the smart and irresistible Emma Taylor . . . if she would just give him a chance.

When Jake takes Emma behind the scenes of his real life, she begins to see how genuine he is, but on-set relationships always end badly. Don’t they? Toss in Hollywood’s most notorious heartthrob and a resident diva who may or may not be as evil as she seems, and the production of Coyote Hills heats up in unexpected—and romantic—ways.

This novel in the deliciously fun If Only romance line proves that the best kinds of love stories don’t follow a script.(courtesy of Goodreads)

Every once in awhile, a book comes out that makes you question whether an author has a direct connection to your mind in order to write a book geared entirely to you. I love contemporary YA romance. I particularly like the fun, fluffy kind where you know that everything will basically be wrapped up in a neat bow by the end. More specifically, I love books about Hollywood and the whole celebrity scene. Either ones that are about established actors or are about people new to the acting world.

Not in the Script ticks every one of my must read boxes. So much so that it was the first book I read after BEA. The book is just as good as I hoped it would be.

The story is told from the alternating perspectives of Emma, the acting veteran, and Jake, the acting newbie. The characters are similar in a way. Both are very "good." I don't mean that they are unrealistically perfect, but more in the way that they are the type of people you'd want to introduce to your parents. She's sweet, he's charming.

Moreover, they are both looking to be something more. Emma is looking to escape from the bad boy decisions of her past and find a way to help people. Jake has a hot bod, but views modeling and acting more as stepping stones to a real career. The easy, jokey chemistry between them is immediately palpable, and it's understandable that they would be attracted to each other. Even more understandable as you get to know them.

It would be easy to write Emma and Jake as one dimensional perfect characters, but Amy did a great job of fleshing them out. As events of the book unfold, we see realistic flaws arise. Jealousy, indecisiveness, leaping to conclusions, and fear of hurting people they love.

I really enjoyed the side characters, especially Jake and Emma's costars Brett and Kimmi. They both seem like smarmy stereotypical starlets, which they are, but they are hints of decentness. I found their antics really amusing. Jake and Emma's families and friends were a tale of opposites. Emma's mom is a loving person, but has become so obsessed with being her manager that she's forgotten to be a mom. It's obvious to everyone but Emma that her best friend Rachel's jealousy over Emma's successful career has largely overtaken their friendship. Contrast that with Jake's saintly, health challenged mom and his cool, normal friends Sophie and Devin. They provide a level of grounding for Jake that Emma could use.

The story is more of a will-they-or-won't-they tale than a smexy times book. You can feel the heat between Emma and Jake, but everything is very innocent - especially considering they are older than most YA characters. About 18 and 19, give or take a year (can't remember exactly). I'm generally more interested in the drama of people getting together than I am in reading loads of steamy make out scenes, so I was happy.

Although it does lead in to my sole complaint. The book is innocent. No swear words. No questionable situations. It's appropriate for younger teens. That's great that there are books out there like this. But...at one point, Emma says "there will be heck to pay." Heck? I cannot imagine a scenario where a seasoned Hollywood actress would say that. It took me completely out of the moment. I don't consider "hell" to be a swear word, and many "clean" YA novels use that as a "safe" word. Just use "hell to pay" or change the sentence to avoid that phrase. Rant over now.

Apart from that, the book was very well written. The alternating voices established each character well. It's a very quick read. The prose flows smoothing, and the pacing was good.

Oh, one other complaint. The book should have been set in Phoenix. Phoenix is far superior to Tucson. :-)

I adored this novel. Hollywood. Sets. Celebrities. I was in heaven. Plus, nice leading characters who I immediately rooted for and well drawn side characters. A sweet, relatively simple romance and a strong plot. What more could you want? This is a feel good novel, and that's exactly what I wanted. Amy Finnegan has become an auto-buy. I can't wait to see what she does next.