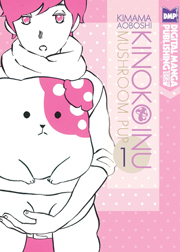 A depressed author. A concerned editor. An eccentric mushroom researcher. And a strange pink mushroom... that turns into a dog?! Put this all together and you get Mushroom Pup. Mushroom Pup tells a heart-warming tale of the power of friendship, a dog's love, and the dangers of dwelling on regrets. With the help of his friends and the mysterious Mushroom Pup, Hotaru Yuyami, a grieving picture book author, slowly begins to move forward after the tragic loss of his beloved dog, Hanako. Full of laughs and warm moments, Mushroom Pup is sure to find a place in your heart. (courtesy of Goodreads)


If you're looking for a quick manga read, Mushroom Pup fits the bill. It's a gentle read, great on a day that you just want something to cheer up.

One thing I like about this volume is that it can appeal to many different ages. Not sure about future volumes, but I could see this appealing to tweens and above. You have the cuteness of a mushroom-turned-dog's antics, but also the portrayal of the main character's debilitating depression, which was spurred by the death of his beloved dog. Any dog lover can sympathize not only with mourning over the death of a beloved pet as well as the comfort a dog can give you during difficult times.

I was a little put off by the silliness of the concept at first. A mushroom turning in to a dog? And since other people can see it, apparently it is not just an illusion. But such skepticism is somewhat unfair given the ridiculousness of most manga series. The spirit of this touching tale is greater than the silliness of its premise.