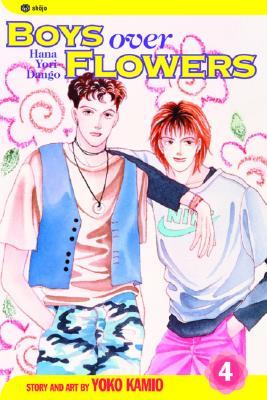 Tsukushi realizes that she would have Rui to herself if Shizuka left for France as planned, but she doesn't want to be like the other scheming girls at her school. So she begs Shizuka to stay in Japan for Rui's sake. Domyoji asks Tsukushi for a date at the airport that Shizuka is leaving from, but his sweet words are drowned out by the sound of jets passing by. (courtesy of Goodreads)

I feel that this series is increasingly like watching a train wreck. It's icky, somewhat painful, and quite gory, yet you can't tear yourself away from it. The series is ridiculous, but not in a silly way - more in a vaguely disturbing way.


For example, I feel like we're supposed to start shipping Domyoji and Tsukushi to be together. Domyoji is the bullying leader of the F4 who in the last volume physically attacked Tsukushi. Now he basically orders her to go on a date with him in his backward attempt to be charming. And despite the basic revulsion I feel towards him, I am somewhat drawn to him.

Then there's Rui, who on the surface is a sweet, gentle boy. He's the one Tsukushi has a crush on. But alas, he's in love with the unattainable Shizuka. However, even he has a dark side. When Tsukushi tries to convince Shizuka to stay in Japan rather than move to Paris for the sake of Rui, is he grateful? No, he lashes out at Tsukushi.

I'm looking at each volume with more scorn, but still plan to pick up the next one. Does it get better?