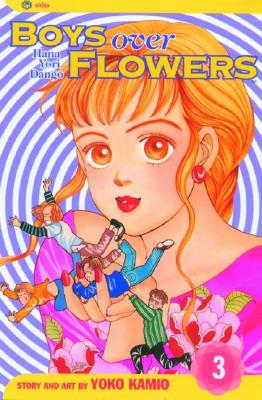 Romantic complications occur when Kazuya, furious about the kiss between Domyoji and Tsukushi, challenges Domyoji to a squid fishing competition. Domyoji starts spreading rumors that Tsukushi is in love with him. When he discovers she's in love with Rui, he goes on a rampage - a rampage that turns into an attack on Tsukushi. This volume also reveals the future plans of the beautiful Shizuka. (courtesy of Goodreads)

Volume 3 of Boys Over Flowers has some questionable issues that makes it a hard volume to like. And yet I still find it an interesting series.


A lot of the volume is your standard melo-drama. All the kids are at a party at a resort. Domyoji and Tsukushi accidentally kiss. Tsukishi is absolutely horrified that she wasted her first kiss on this person she hates, especially since she didn't mean to kiss him (this is a theme I've seen in other manga too). Rui is embarrassed that his beautiful friend/crush realizes that he also has a thing for Tsukushi. He either tries to seduce Shizuka or she tried to seduce him - it was a bit confusing. Then Domyoji makes trouble for Tsukushi, telling everyone that she was all over him and that she's the laughing stock of the party, when in reality he's fascinated by her.

Then school starts and it's back to the old bullying. Only much, much worse. Someone tells Domyoji that Tsukushi secretly likes Rui and she only came onto Domyoji to make Rui jealous. This makes Domyoji completely insane with fury (and jealousy). He beats a guy nearly to death for no reason.

And then he confronts Tsukushi. This is where the volume becomes disturbing. He hits her and then starts groping and kissing her while Tsukushi is shouting at him to stop. Suddenly he does. He's instantly apologetic and basically assures her that he'd never hurt her, that he's not that kind of guy.

I feel like Domyoji is being presented as a type of hero in this manga series. Obviously a complicated and cruel one, but a crush-worthy guy nonetheless. And I find it very troubling that a guy who would try to assault a girl could ever be presented as a hero.

Still, I'll keep going with this series and see how it ends up.