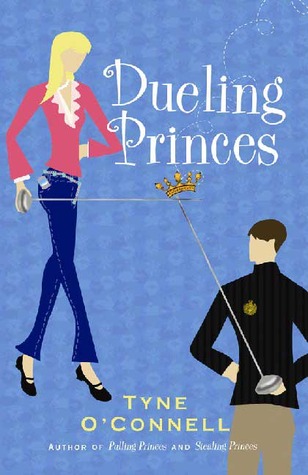 Dating Britain's royal Prince Freddie has made Year Eleven at St. Augustine's the best one so far for Calypso Kelly. Together with best friends Star and Georgina, and new chums Portia and Indie, LA-born Calypso at last seems to have everything she's dreamed of or does she? With the national fencing trials coming up, balancing school, friendships, and a royal romance is a lot harder than she imagined. Something will have to give, but what--or whom--will it be? Picking up where "Stealing Princes "left off, this funny, fast-paced third book chronicling the life and times of Calypso Kelly will not disappoint.(courtesy of Goodreads)

I think there's a time and place for mindlessly fun reads and this certainly is that. There's a lot to criticize about these books if you want to. Calypso is immature. Freddie is boring. The side characters are one dimensional. I could go on. But ultimately, these books are a good laugh.

The framework of this series is that Calypso, the American student in a British boarding school, is dating Prince Freddie, the British prince. But don't read the books because of that because Freddie is the dullest, stupidest character and he has hardly any time on the page. This series is all about Calypso and her friends going on adventures, getting into scrapes, having fights, sticking up for each other, etc. It is the epitome of what a boarding school book should be.

Part of what attracted me to the series was the fencing element. Calypso is a talented fencer. Since fencing is my new hobby, I loved all the scenes of her fencing. Plus the fencing instructor was hilarious.

The main dilemma in Dueling Princes is Calypso's mother unexpectedly showing up in England, having left her father. On one hand, Calypso's humiliation at her mother's antics is extremely immature - particularly a scene where she and her mom literally run away from Prince Freddie. Her mom is going through a mid life crisis and should be offered some sympathy and kindness by her daughter. On the other hand, viewing your parents as the most embarrassing creatures on earth is such a teenager thing to do. Calypso acts as most youngish teens would (perhaps she's still on the immature side). I could understand.

Dueling Princes and the entire Calypso Chronicles series is great fun to read if you want to get a taste of wealthy British boarding school life. The author is from a very posh background and is the mother of boarding school girls, so I think she knows what she's talking about. It's not a brainy read, but well worth picking up.

Powell's Books (Support an Indie Bookstore!)
Posted by Alison Can Read at 12:23 AM