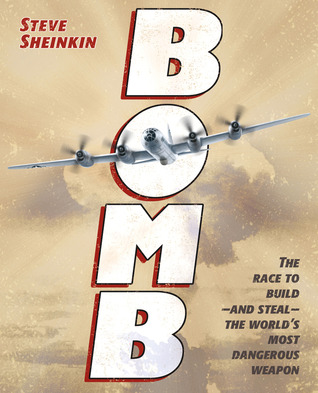 In December of 1938, a chemist in a German laboratory made a shocking discovery: When placed next to radioactive material, a Uranium atom split in two. That simple discovery launched a scientific race that spanned 3 continents. In Great Britain and the United States, Soviet spies worked their way into the scientific community; in Norway, a commando force slipped behind enemy lines to attack German heavy-water manufacturing; and deep in the desert, one brilliant group of scientists was hidden away at a remote site at Los Alamos. This is the story of the plotting, the risk-taking, the deceit, and genius that created the world's most formidable weapon. This is the story of the atomic bomb.

Bomb is a 2012 Washington Post Best Kids Books of the Year title.

Bomb is a 2013 Newbery Honor book. (courtesy of Goodreads)

Bomb received a lot of buzz when it came out in 2012. And boy was it deserved. This is the perfect book for lovers of history - World War II and the Cold War in particular, for lovers of science, for lovers of spy thrillers, and more.

1: The creation of the atomic bomb;
2: The story of some brave Norwegians who helped prevent the Nazis from building an atomic bomb;
3: The Soviets attempt to steal atomic weaponry secrets from the US via spying.

The separate narratives were broken up by chapters. Generally, there would be two short chapters on one story line and then the book switched to a different story line. This easily could have made the book feel choppy, but instead it kept everything fresh and exciting. It was leading us to the edge of a cliff and letting us danger for a few chapters before pulling us back up.

Bomb is written at the reading level of younger YA. I think most middle schoolers could handle it with ease. Still, it's complex enough and substantively rich enough that I didn't feel like I was reading "down." It has material that would interest any adult and is presented in a much more approachable manner than many adult non-fiction books.

If you're a history buff like me, you must pick up Bomb. It's a good reminder to me to give YA non-fiction more tries. Bomb is wonderfully readable, well-written, and chockful of fascinating information.