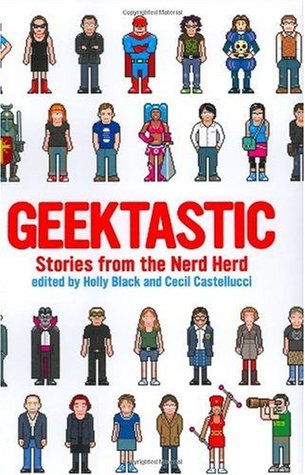 Geektastic: Stories from the Nerd Herd edited by Holly Black and Cecil Castellucci

With illustrated interstitials from comic book artists Hope Larson and Bryan Lee O'Malley, Geektastic covers all things geeky, from Klingons and Jedi Knights to fan fiction, theater geeks, and cosplayers. Whether you're a former, current, or future geek, or if you just want to get in touch with your inner geek, Geektastic will help you get your geek on!(courtesy of Goodreads)

Geektastic is a book that I glanced at in a bookstore awhile ago but didn't buy. I was pleasantly surprised that my library carried a copy, so I checked it out. It is a series of short stories written by well known YA authors including John Green, Libba Bra, Cassandra Clare, and many more. I expected it to be a series of non-fiction essays about the authors' geeky pasts, but instead there were fictional essays about wonderfully geeky characters who struggle as teens but have a happy experience in their respective stories.

My feelings while reading the stories vacillated. Much of the time, I admired these kids who were all so intelligent and so passionate about what they loved, whether it was Star Trek, MMPORGs, dinosaurs, etc. The rest of the time I had the *wrong* thoughts of "wow, at least I wasn't that much of a loser in high school." (when in truth, I was as much or more a "loser" as any of these kids).

As is typical in short story collections, I liked some stories better than others. To my surprise, the stories written by the best known authors John Green, Libba Bray, and Cassandra Clare were only middling quality. In fact, John and Libba's stories were my least favorites. They were both fine stories, but nothing that stood out to me. John's story was too short to develop the characters or the plot adequately.

My favorite story was probably "The Truth About Dino Girl" by Barry Lyga. It's about a freshman girl who is obsessed with dinosaurs. And lacks a few social skills. When she's humiliated by an upperclass girl whom she had previously admired, she gets her revenge. Revenge without consequences or conscience is perhaps not the best message to send, but anyone who's ever been bullied knows, it's immensely satisfying.

I think my second favorite story was "Quiz Bowl Antichrist" by David Levithan. It's about a misfit group of kids at a quiz bowl tournament, but really it's about a kid who acknowledges that he's part of the loser group, but still thinks he's above the other losers. It features a colorful group of quiz bowlers that was fun to read about and the main character comes to understand that he teammates are people to be respected rather than condescended to.

Us book bloggers are all geeks in some fashion. Maybe you geek out over Doctor Who or Buffy or Supernatural or Hunger Games or Harry Potter or even just books in general. Geektastic has a great set of stories about characters who you'll identify with, even if you don't understand what they're passionate about. And, if you find any of the stories tedious, flip through a few pages, and you'll be onto the next.