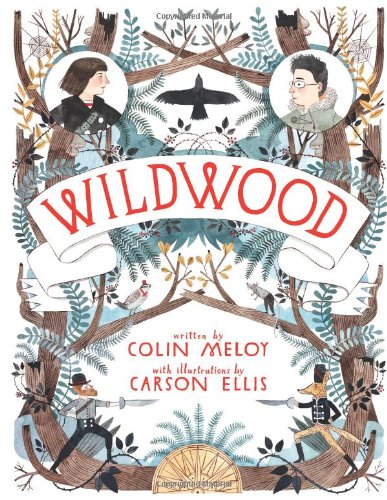 When her baby brother is kidnapped by crows, Prue McKeel begins an adventure that will take her and her friend Curtis way beyond her hometown and deep into the Impassable Wilderness. There they uncover a secret world in the midst of violent upheaval, a world full of warring creatures, peace-loving mystics and powerful figures with the darkest intentions. What begins as a rescue mission becomes something much bigger as the two friends find themselves entwined in a struggle for the very freedom of this wilderness. A wilderness the locals call Wildwood. Wildwood is a spellbinding tale full of wonder, danger and magic. It combines the thrill of a secret world and the buzz of modern city life. Original and fresh, yet steeped in classic fantasy, this is a novel that could have only come from the imagination of Colin Meloy, celebrated for his inventive and fantastic storytelling as the lead singer and songwriter of The Decemberists. With dozens of intricate and beautiful illustrations by award-winning artist Carson Ellis, Wildwood is truly a new classic for the twenty-first century. (courtesy of Amazon)

Wildwood is an incredible concept and a good book, but it fails to reach its full potential. Like many readers, I picked up this book because I am a crazy obsessed Decemberists fan. Colin Meloy is one of the best songwriters I've ever heard. He turns short (and sometimes long) songs into epic folk tales using language that rarely makes it out of the dictionary, let alone into song.

What works with Wildwood? The idea behind it is fascinating. A secret world exists within the city of Portland. The Impassible Wilderness is full of talking animals and humans and it has its own politics, history, and culture. Meloy does a great job setting up the world. By the end of the book, I felt very knowledgeable about the Impassible Wilderness, which is often not the case with fantasy worlds. The talking animals were also well done. They weren't merely people in fur or feathers. They maintained characteristics of their species despite dressing and talking like humans.

As one would expect with Meloy, the vocabulary of Wildwood is unusually sophisticated. It's like Meloy made a bet that he could write a book without repeating a single word. A child (or an adult) reading this book will encounter a lot of new words, but it's fairly easy to comprehend their meaning through the context.

I also liked the heroine and hero, Prue and Curtis. Prue is a strong, capable girl. She starts out that way and is still essentially the same at the end of the book. Curtis grows tremendously. He starts out as a geeky, clingy, annoying little boy. He is gullible and easily used. By the end of the book, he is still rather geeky but also strong, brave, and capable of determining right and wrong for himself rather than relying on other people. As for villains, the Dowager Governess is classic. Her beauty and guile can easily mislead the gullible or greedy and if that still doesn't get her what she wants, she ruthlessly goes after her goals.

What didn't work? The length, for one. Few children's books can properly pull off 560 pages. Just because it works for Harry Potter doesn't mean it will work for other books. Meloy is an excellent writer. His words create rich images and he is a good plotter. He has not yet perfected his skill at pacing. Wildwood dragged horribly. I wanted to finish the novel, because it was interesting, but it turned into a chore. I got through the book by assigning myself pages. I would read 50-100 pages a day. Luckily, the pages go by pretty fast...but that's mostly because I am a very fast reader and much older than the targeted age group. The average kid would have a lot of trouble getting through the new words and complex plot lines.

Meloy also falls into the too-common trap of children's authors. Prue's parents are simply awful. They have good intentions but they are horribly neglectful of both their children. Curtis's parents don't appear in the book at all until the very end. There's nothing wrong with having absent or bad parents in a book. It works as a plot device for a reason. But it's so overdone that a book where the children can be the stars while also having good parents is far more impressive.

Wildwood is worth reading because it's such a rich fantasy world. It is a good first book, but I hope Meloy improves on his pacing in the future volumes.