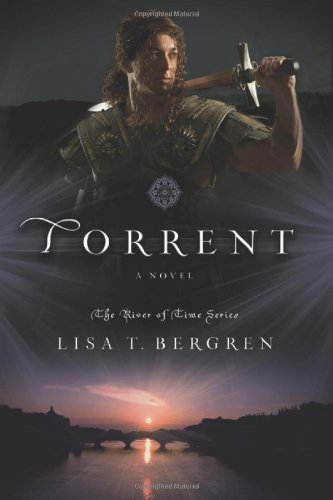 When Gabi and Lia finally learn to surf the river of time, they realize they must make hard choices about life and love in the third and final book in the River of Time series.

Gabi and Lia Betarrini have learned to control their time travel, and they return from medieval Italy to save their father from his tragic death in modern times. But love calls across the centuries, and the girls are determined to return forever—even though they know the Black Plague is advancing across Europe, claiming the lives of one-third of the population. In the suspenseful conclusion of the River of Time series, every decision is about life … and death. (courtesy of Goodreads)

Forgive me, my friends. I'm going to confess a sin. I cannot profess undying love and adoration for Torrent, the final book of the River of Time series. I can happily claim that I enjoyed the book greatly, but I don't share in the belief common among most reviewers that the book is virtually perfect.

Torrent has a lot of things going for it. There is tons of action. The She-Wolves get into as much trouble as ever. Oftentimes, they purposely lead themselves into trouble in a selfless attempt to help the Forelli's. Someone you care about will die, in a rather horrible way. Once again, the violence is not tamped down. You certainly won't be bored reading this book.

And there is no lack of hot medieval guys. Luca remains cute and funny. Marcello becomes more likable. He is every mother's dream for her daughter - brave, steady, romantic, responsible, kind. I liked him more in Torrent than in the previous books. But my heart belongs to Lord Greco. Swoon! Sexy, dangerous, loyal, good.

Gabi is a highlight of this series. She is one of the better written YA heroines. I love her bravery, that she happily steps up to fight for causes she believes in. In Torrent, she faces difficult choices - between what would be easy and pretty good versus what would be hard but better. I admire her determination to not take the easy route when what is right demands something different. I also like that Gabi makes mistakes and does stupid things that make the fight harder. It makes her more realistic and relatable.

Now for the reason my overall feelings for this book are less than perfect. There's too much cheesiness and convenience. I am happy that Gabi was able to reunite her entire family - Mom, Dad, Lia, and her. She clearly cares for all of them deeply. But the big happy family theme with all four people fighting felt forced. Part of me wanted to cheer them on and the other part wanted to roll my eyes. Plus the fact that all family members were good fighters (even Mom's newly acquired skills) seemed overly convenient. Some parts of the plot cleaned up too nicely to be believable (to the extent that a time travel book can be believable). Other parts, such as the origins of the Brotherhood of which Marcello, Lord Greco, and others were a part, were introduced, but never fully explained. Finally, while I like Marcello, I love Lord Greco. In my ideal book, I would love the main guy in the novel more than the foil. But then again, plenty of people are Team Jacob and I don't think that diminishes Twilight. It's just my preference.

I would recommend that anyone read the River of Time series. While I have a few reservations about it, it is certainly fun, action-packed, and oozing with romance.