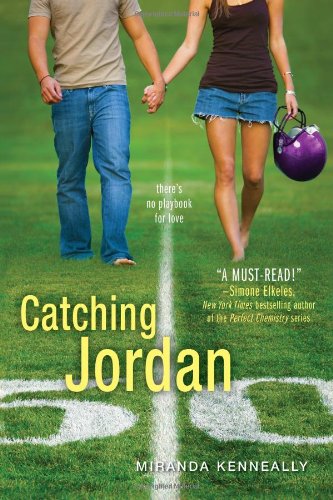 What girl doesn't want to be surrounded by gorgeous jocks day in and day out? Jordan Woods isn't just surrounded by hot guys, though - she leads them as the captain and quarterback on her high school football team. They all see her as one of the guys, and that's just fine. As long as she gets her athletic scholarship to a powerhouse university. But now there's a new guy in town who threatens her starring position on the team... and has her suddenly wishing to be seen as more than just a teammate.(courtesy of Goodreads)

The first few lines of a book are sometimes indicative of whether I'll like the entire book. Most often, the first paragraph is blase - I neither like nor dislike it - I keep reading until the story gets interesting. But occasionally, the first few lines of a book catch you in that indescribable, magical way. The feeling is something akin to neon blinking lights screaming "This book is going to be awesome!" That was my immediate reaction to Catching Jordan. Something about the writing and Jordan as a character immediately spoke to me and carried throughout the entire book.

Jordan is one of the guys. All her friends are guys. She has a brother who she idolizes. The only female influence in her life is her mom, whose attempts at feminizing Jordan are brushed off. Jordan is definitely a unique female YA character. She holds her own in the guy conversations. She laughs off statements that most girls would find insulting or disgusting. She can throw insults as well as she can take them. I've never met or read a character quite like Jordan, yet she felt entirely real and sympathetic.

For all of Jordan's knowledge about guys, she is a late bloomer when it comes to romance. Until new guy Ty moves to town, romance hasn't been on her radar. Pretty soon, all she can think about is handsome Ty. Not only that, but Jordan is entirely blind to the fact that her best friend Henry is in love with her. It is obvious to everyone else, including the reader. It is both frustrating and fun to watch Jordan flounder her way through the sea of boy-girl interaction when she has successfully waded through it for most of her life. On the bright side, I loved that Jordan did not entirely lose her tough exterior once the romance got rolling. Jordan may be as insecure as any other teenage girl when it comes to relationships, but she knows who she is and won't let anyone tell her what to do.

Catching Jordan has one of the best depictions of guy friendships that I've ever read. Dialogue is a prominent feature of this novel. Much of the character development and plot is displayed through conversations between Jordan and her friends. Guys talking nothing like girls, but their conversations are, in some ways, the same. Miranda did a wonderful job of showing how guys joke around constantly, yet occasionally manage to work in a sensitive, emotional comment. There's no angst here. The dialogue was a realistic portrayal of boys' display friendship, anger, sadness, and even love in the "show emotion without actually showing emotion" way of men.

I loved the strong presence of Jordan's family in the novel: her mother, father, and brother. Her mother is a somewhat flat character who supports Jordan and pushes her to be more feminine. Her brother is a fabulous guy. A star college football player who protects and befriends his kid sister. Jordan's relationship with her dad is the most significant subplot. He hates the fact that she plays football and won't even watch her games. As a famous pro football player, he understands the risks that Jordan is taking by playing football. But he fails to recognize that Jordan also understands and accepts these risks.

Slight spoiler alert: I did have one big problem with the book - the role sex played. I did not like the fact that Ty and Jordan have sex at the start of their relationship - I like you, you like me, let's have sex - now we're boyfriend/girlfriend. If the characters were in their 20s, I would find casual sex more realistic, but this seemed like a bit of a stretch. Perhaps I'm too old fashioned, but I don't think that many teenage girls - tomboys or not - would lose their virginity to a guy they like but are not yet dating. Your "first time" is supposed to be special. Major spoiler alert (highlight text to read): When Jordan gets with Henry at the end, you'll notice that she doesn't leap to have sex with him. Clearly symbolizing that her relationship with Ty was just physical while her relationship with Henry is "real."

In almost every way, Catching Jordan was a refreshing burst of light in a field of tired contemporary fiction novels. A one-of-a-kind main character that you can't help love, a sweet romance, great examples of friendship, and a prominent family subplot. I highly recommend Catching Jordan.