Giveaway: To Kill A Mockingbird Blu-Ray! 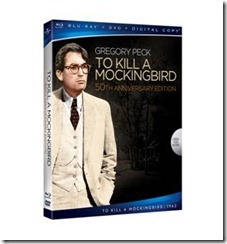 TO KILL A MOCKINGBIRD: Top Ten American Classics of Our Time

TO KILL A MOCKINGBIRD, one of the screen’s most beloved and critically acclaimed films, celebrates its 50th anniversary with a commemorative Limited Edition Collector’s Series Blu-ray™ Combo Pack as well as on Blu-ray™ Combo Pack and DVD from Universal Studios Home Entertainment on January 31, 2012. The powerful and poignant adaptation of Harper Lee’s Pulitzer Prize-winning novel hits the half-century mark, digitally remastered and fully restored from high resolution 35MM original film elements, plus more than three-and-a-half hours of bonus features chronicling the making of the cinematic masterpiece.

Unquestionably an American classic, TO KILL A MOCKINGBIRD is one of the most beloved films and novels of our time. In honor of its release on Blu-ray on January 31, we will take a look back at other classic books and movies that have helped define our nation over the last century.

Set on Long Island’s North Shore and in New York City during the Roaring Twenties, F. Scott Fitzgerald’s The Great Gatsby is often cited as one of the best novels of the 20th century. The novel has spawned seven film adaptations, numerous book and graphic novel interpretations, stage productions, a BBC radio special, computer games and even an opera.

Based on the 1900 children’s novel The Wonderful Wizard of Oz, 1939’s The Wizard of Oz is adored by both children and adults the world over. This film is unique due to its early use of Technicolor, special effects, and bizarre characters, sets, costumes and makeup. Despite all of the love the film receives now, it was initially a financial failure, but rereleases have more than made up for its early disappointment.

John Steinbeck’s amazing novel The Grapes of Wrath won the Pulitzer Prize in 140, as well as the Nobel Prize for Literature in 1962. The novel is set during the Great Depression and focuses on a family trying to escape their bleak life in the wake of the Dust Bowl. This classic American novel has been the inspiration for a great film of the same name, a play, an opera and a song by Bruce Springsteen.

Starring and directed by Orson Welles, Citizen Kane is considered by many to be the absolute greatest American film ever made. The film is loosely based on the lives of both William Randolph Hearst and Welles himself. Citizen Kane is noted for its innovative cinematography and unique narrative structure, and was nominated for nine Academy Awards.

J.D. Salinger’s novel The Catcher in the Rye has become incredibly popular with teenagers over the past 60 years. The book focuses on angst, alienation and rebellion, and some of the content, like its use of profanity and sexuality, have made it frequently challenged and sometime banned by different governments. This novel has also been famously linked to numerous murders and crimes, most notably that of John Lennon by Mark David Chapman.

Truman Capote’s 1966 novel In Cold Blood detailed the 1959 murders of a Kansas farmer, his wife, and two of their children. This non-fiction work took Capote six years of work, researching the family, their community and their killers, Richard Hickock and Perry Smith, with his childhood friend (and author of To Kill a Mockingbird), Harper Lee. At the time, the book became the best selling crime novel.

Set after the Civil War, Toni Morrison’s breathtaking 1987 novel Beloved is the story of an American slave who escaped slavery by fleeing to a free state with her children. After killing one of her children rather than sending her back into slavery, the woman and her family are haunted by the presence of the child’s ghost. Beloved won the Pulitzer Prize for Fiction in 1988, and was adapted into a film staring Oprah Winfrey in 1998.

1993’s Schindler’s List is a film about a German businessman who saved the lives of thousands of Jewish refugees during the Holocaust by employing them in his factories. The film, directed by Steve Spielberg, won seven Academy Awards, including Best Picture and Best Director. Schindler’s List stars Liam Neeson, Ben Kingsley and Ralph Fiennes.

For your chance to win a copy of TO KILL A MOCKINGBIRD 50TH ANNIVERSARY EDITION, simply leave a comment with your e-mail address and the answer to the following question:

To Kill a Mockingbird was written by which Pulitzer-Prize-winning American Author?

-Contest ends February 8 at 10 PM PST
-Winners will be chosen at random through Random.org
-U.S./Canada only
-You must be 13 years or older
-Alison Can Read is not responsible for items lost or damaged in shipping.
Posted by Alison Can Read at 1:18 AM