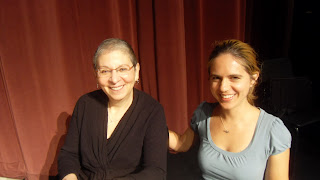 Last Friday, I had the great fortune to hear Nancy Pearl speak. Nancy is a library (now retired) who has written four incredible books with thousands of reading recommendations. Her books are: Book Lust, More Book Lust, Book Crush (for kids and teens), and the brand new Book Lust To Go (books that allow you to armchair travel). You're sure to find dozens of books to read any time you open her books.

Nancy spoke at a high school auditorium on a Friday night in an outer-ring suburb of Minneapolis. Since it was so far out, there weren't that many people there - about 50 or so. With such small numbers, the talk had a personal, intimate feel. She spoke for about 45 minutes. The talk was excellent - funny, informative, compelling. I think it's the only talk she gives, because I heard her speak a few years earlier at the downtown Minneapolis library, and the speech was almost identical. But I enjoyed hearing it again.

For you Nancy Pearl fans out there, I thought I'd summarize some points in her talk that stood out to me:

Origins of the Librarian Action Figure

In 2001 or 2002, Nancy was at dinner with one of the heads of Archie McPhee, a company that makes unusual action figures, including ones for Emily Dickinson and Jesus Christ. They started joking that they needed a librarian action figure. Nancy laughed it off, but awhile later, her friend called her up and asked her to be the action figure's model. She agreed and was, as she put it, "digitized."

Since it was an action figure rather than a doll, it needed an action. Nancy and the creators all agreed that the "Shh" finger was the most appropriate and funny thing the figure could do.

The doll came out in mid-2003. By complete coincidence, it came out within weeks of her first book, Booklust.

Origins of the Booklust books

One of the publishers of Sasquatch Books, a small Seattle publisher contacted Nancy and suggested the idea of writing a book that made book recommendations in different categories. He said the idea came to him because he was looking for a great Civil War fiction book to read. As a sort of test, Nancy came up with a list of a dozen or so Civil War fiction books. She didn't have anything to do at work that afternoon, so put together a list within a half hour of speaking to him on the phone. Among the recommendations were Gone With The Wind, Andersonville, and Killer Angels. The publisher was thrilled and asked her to put together 300 different categories of books, about 250 words each.

When Book Lust was published, she assumed that she'd put every book she loved in there. She "foolishly" included her e-mail address in the forward to the book asking readers to send in suggestions for books she missed. She expected to get 5 or 6 e-mails, but instead hundreds began pouring in. The e-mails typically said "I can't believe you missed this book..." and then the writer would list 200 of their favorite books. Some of these books Nancy had never heard of, some she didn't like, and some she loved but had completely forgotten.

A new book was in order. More Book Lust came out a few years after Book Lust was published. Nancy wanted to call it, Book Lust 2: The Morning After. The publishers thought the title was funny but balked at the last minute, worrying that it would be too controversial. Nancy still thinks of the book with the more amusing title.

Book Crush was the next book. It is a list of books for kids and teens. Nancy started out as a children's librarian and has a huge array of knowledge about children's literature.

Her newest book, published October 1, 2010, is Book Lust To Go. Nancy describes herself as an armchair traveler. She travels a lot for work, but really doesn't enjoy it. She'd much rather sit at home and travel the world through books.

Nancy fell in love with the library at an early age. She grew up in the Detroit-area. Her parents were big readers and loved her very much, but they were also extremely unhappy people. Consequently, her home was not a place where she felt safe or happy. She spent all her free time at the library. She went there every day after school, and on Saturday, she would pack a lunch and be there from the time it opened until it closed. The librarians frequently drove her home when the library closed, knowing that if they didn't take her home themselves, she might go somewhere else.

Nancy went to college to become a librarian. Her goal was to be a children's librarian. Her first job out of school was with the Detroit Library System. She noted that she never worked at the same library as Mrs. Whitehead, but she was her colleague through the library system. This was a great source of pride for Nancy.

Someone asked Nancy for a few good YA reads. She recommended the Hunger Games series, anything by Sarah Dessen, anything by M.T. Anderson (especially for boys), and Neverwhere by Neil Gaiman. Nancy loves the first line from the book I Capture the Castle by Dodie Smith: "I write this sitting in the kitchen sink." She also said that she thinks the best vampire book for teens is Sunshine by Robin McKinley. I haven't read this one and want to get to it ASAP. In another part of her talk, she mentioned how much she liked Rosamind DuJardin's books.

In light of Banned Books Week and the recent Scroggins article, I asked Nancy about her experiences with banned books. She said that pressure to remove books are not quite as strong in a public library as in a school library. Not that they're non-existent, but parents approach a school library's responsibilities toward a child differently than they do a public library.

Nancy mentioned that one of the difficult parts of being a librarian is having to purchase books that portray all viewpoints. She specifically recalled how hard it was to decide whether to put books that denied the Holocaust on her library's shelves. An interesting twist to the banned books issue that hadn't occurred to me.


I had Nancy sign a copy of Book Crush for a giveaway. 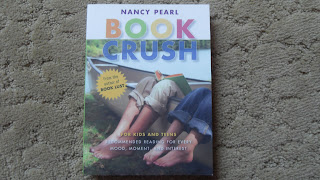 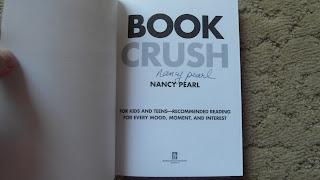 Book Crush features books for Young Readers, Middle-Grade Readers, and Teen Readers, with topics such as:

Not A Dry Eye In The House
Ghosts I Have Loved
Utopia - Not!