I read Mistwood by Leah Cypess last month and absolutely loved it. Read my review here.

Leah was gracious enough to answer a few questions for me. 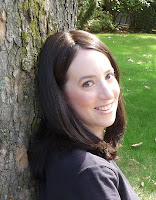 Leah Cypess has been writing since the fourth grade, but before becoming a full-time writer, she earned her law degree from Columbia Law School. She worked for two years at a large New York City law firm, then moved to Boston, where she now lives with her husband and two young daughters. [Mistwood] is her first novel. (taken from back cover of novel)
Visit Leah's website, follow her on Facebook or on Twitter!

1. Please give a 1 or 2 sentence summary of Mistwood.

It's the story of a powerful shapeshifter bound by an ancient spell to protect the king's dynasty. But when the books starts, she's alone in her forest, she's lost both her memory and her powers, and the king isn't exactly who he claims to be...

2. I loved the complexity of the fantasy world in Mistwood. Everything from Isabel's supernatural abilities to the court politics was so well-developed. How did you build the world? Do you have a lot of background in your mind that never made it onto the pages of the book?

Thank you! I'm not an advance planner, so I made up most of the world as I went along; afterward, of course, I went back and tried to make sure it all made sense, add relevant details, and iron out inconsistencies. There is a lot of background in my mind about the
difference between the northerners and southerners -- I think the northerners are a proud, chivalric, feudal society, whereas the south is much more mercantile and trade-oriented. I think that's still hinted at in the book, but not laid out clearly; it's not necessary for the main story.

3. If you were to write a spin-off (as opposed to a sequel), which secondary character's story would you most be interested in exploring?

Well, I actually am *ahem* in the middle of revising the companion novel. And one of the secondary characters from Mistwood does play a major part... *looks mysterious*

But if I was going to use one of the Mistwood characters as a main character in a book or story, I suspect it would be Ven. I think his earlier life was fascinating. I don't know exactly in what way, yet!

4. How do you think your training as an attorney affected your writing?

To be honest, I don't really think it did. Legal writing and fiction writing are two very different skills, and I had been writing fiction for a very long time before I learned legal writing.

That said, as a third-year law student, I was permitted to take up to 12 undergraduate credits if I could demonstrate that they would be useful for my intended legal career. I had already written the first few chapters of Mistwood, and wanted to take an undergraduate fiction writing workshop; so I met the dean of students, explained this to her, and added, “If you really want, I can make up some reason about why this will be helpful for practicing law.” She said, “Brad Meltzer took an undergraduate fiction workshop in his third year of law school, sold his first book right after graduation, and never practiced law for a single day. Go for it.” I critiqued the first few chapters of Mistwood during that class.

5. Can you describe your writing process? Are you an outliner or more spontaneous plotter? I read somewhere that you wrote Mistwood by hand. Do you prefer that writing style?

Very much a spontaneous plotter... at least until I've written myself into a tangled mess, at which point I sometimes sit down and try to write an outline. Which I then ignore.

I do prefer writing by hand, something I used to think was a liability when I was younger (though I have learned to be a fast typist!) Now that I have kids, though, it's crucial. I bring a notebook and pen to the playground and that's where I get a lot of writing done.

6. What are some books that had a big influence on you growing up? Have you always preferred fantasy?

I've always preferred fantasy, but I also liked mystery a lot, and I read everything ever written by L.M. Montgomery. The Belgariad by David Eddings and Arrows of the Queen by Mercedes Lackey were probably the series that really hooked me on high fantasy.
Posted by Alison Can Read at 9:47 PM