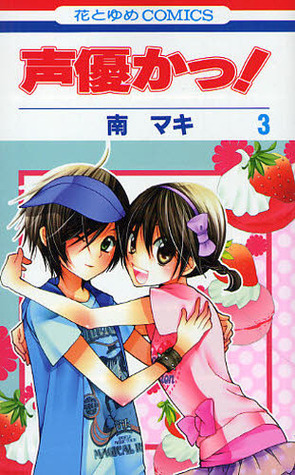 Kino Hime is a 15 year-old girl who just started her first year in a high school for voice actors (Seiyuu) called Hiiragi Academy. She dreams of becoming the voice of the main character in one of the most popular series in Japan, "Magic Fighter Lovely Blazers". The academy is the number one school which allows students to make their voice acting debuts and also includes other departments such as general education, sports, music, acting, and art.

Of course this Academy is full of celebrities, too. Two of Hime's upperclassmen are none other than the two rising idols of the group "Idol Unit AQUA".

But Hime's dream is hard to fulfill. Her voice is not really suitable for a voice actress and her new classmate Kudou Senri doesn't waste time in pointing that out. Will Hime prove everybody, especially Senri, what she is capable of despite the first appearance? (courtesy of Goodreads)


What is it with Japanese manga and gender bending (or is gender switching more appropriate? Gender hiding?) There are so many titles out there that involve a character having to pretend to be a different gender or getting confused for a different gender. It's not a bad thing, but I find the obsession with it rather odd.

In this volume, Hime has officially moved out of her house to live in the apartment that her producer set up for her. One of the conditions of being basically the producer's slave is that she has to pretend to be a boy at all times except when she's in school. Someone's got a fetish. Still, there are fun antics about Hime trying to be a boy.

Much of this volume takes place at a voice retreat Hime is attending. In general, I found a lot of things confusing. There are lots of voice retreat scenes where Hime is trying to get the ability to do her "prince" voice on command. She's interracting with some guy whose importance I can't place. And then there are other scenes where she isn't at the voice retreat and she's meeting up with Senri Kudo. There's a few adorable instances with Kudo and kittens - the highlight of the volume.

Overall, the pacing of this volume was very strange. I am quite confused by this series, but I continue to be intrigued enough to keep going. We will see if that continues.