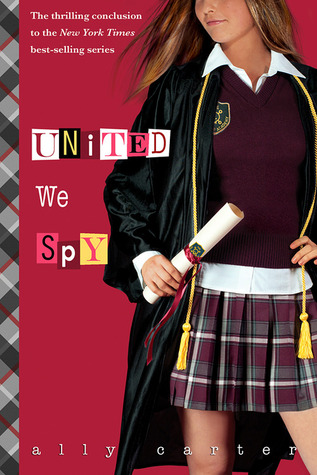 Cammie Morgan has lost her father and her memory, but in the heart-pounding conclusion to the best-selling Gallagher Girls series, she finds her greatest mission yet. Cammie and her friends finally know why the terrorist organization called the Circle of Cavan has been hunting her. Now the spy girls and Zach must track down the Circle’s elite members to stop them before they implement a master plan that will change Cammie—and her country—forever. (courtesy of Goodreads)

If you're looking for a young adult series featuring a strong female narrator, look no further than the Gallagher Girls series. United We Spy, the last book in the series is just as enjoyable as the previous five books and brings the series to a satisfactory end.

The first Gallagher Girls book came out in 2006. I can't remember exactly when I read it, but I think it was at least four or five years ago. I've read the subsequent books as they've come out. This has caused somewhat of a problem. There's not a huge amount of recap at the beginning of each book. Recaps are generally a major pet peeve of mine so in theory I'm glad that Gallagher Girls don't have them. However, since there is such a large lag in reading time between each book, it's taken numerous chapters to recall what happened previously. It was less a problem with this book than with the previous. Now that the whole series is out, newcomers are in for a treat. You can read all six books in one go and get the full experience.

Cammie's strengths - her bravery, intelligence, and ingenuity - are at the heart of this series. I love how Ally Carter created a main character who feels realistically girlish and, at times, vulnerable, but could easily kill you with her eyes closed and one hand tied behind her back. Too often "strong" characters (i.e. Rose in Vampire Academy) are hard and impenetrable people. Cammie feels like a normal girl who can do extraordinary things.

As with the previous novels, Cammie relies on her best friends Bex, Macy, and Liz as well as her boyfriend Zach to finally end the Circle of Cavan. I put friends and boyfriend in the same paragraph, because this series is one of the few that emphasize friendship and romance equally. From the very first novel, when Cammie's friends helped her sneak off with a local boy to now when Cammie is in love with spy boy Zach, friendship is at the heart of this novel. The romance between Cammie and Zach is always great fun. It's one of those relationships where they strengthen each other. Zach keeps Cammie at his side rather than standing in front of her to protect her. They're equal.

The plot of this novel goes from one page-turning spy sequence to another. The girls travel all over the world and get themselves way in over their heads. It's just what we've come to expect with this series. In some ways the plot is forgettable (I say that because I've forgotten a lot of it very quickly), but that doesn't take away from my enjoyment of it. For the most post, the series ended as I expected it to and how I wanted it to.

The sign of a good series is that when it comes to an end, not only am I satisfied, but I want to go back and read all six books again. The Gallagher Girls series is a must read for any YA lover. Not only is it great fun, but it portrays strong female characters, close friendships, and empowering romance.