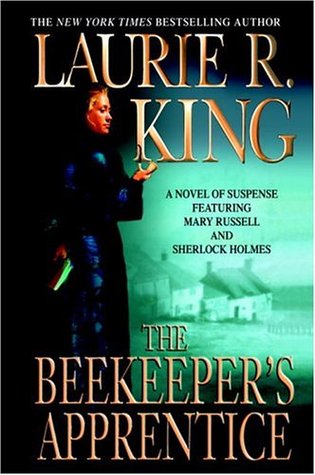 Long retired, Sherlock Holmes quietly pursues his study of honeybee behavior on the Sussex Downs. He never imagines he would encounter anyone whose intellect matched his own, much less an audacious teenage girl with a penchant for detection. Miss Mary Russell becomes Holmes' pupil and quickly hones her talent for deduction, disguises and danger. But when an elusive villain enters the picture, their partnership is put to a real test. (courtesy of Goodreads)

It seems like Sherlock Holmes is everywhere these days. There's the BBC Sherlock (which outshines everything else by a million watts, in my opinion). There's CBS's Elementary which is a blatant Sherlock rip-off (whose differences from the BBC version seem to be largely motivated by a desire to avoid a lawsuit by the BBC,) but is still a lot of fun. And there's also the two Robert Downey Jr movies from a few years ago. Not to mention the Arthur Conan Doyle originals.

If you're a fan of any incarnation of Sherlock Holmes, you will love The Beekeeper's Apprentice. It is shelved in the Adult Mystery section, but this first novel features a teenage protagonist named Mary Russell who meets the now-retired Sherlock Holmes (he's in his late 50s). It's set during World War I.

Mary, in many ways, is a female Sherlock Holmes. I imagine that Holmes was very similar in disposition to Mary as a youth. She is a character largely ruled by logic. She is haunted by personal tragedy, but unlike most teenage characters, she does not let this define her. Mary is intelligent, forthright, and confident. Over the course of the novel (which takes place over several years), Holmes serves as Mary's most important mentor and friend. But through it all Mary maintains beliefs and activities staunchly opposed to those of Holmes. She does not allow herself to be defined by Holmes, which I think makes Holmes like Mary even more.

The Sherlock Holmes of this series very closely follows the Sir Arthur Conan Doyle's character. This Holmes can be abrupt, intellectual, and brush off those who bother him without a second thought. At the same time, he is charming, enjoys culture, can be passionate, and fully fits into society when he chooses to do so. He is far less of a "high functioning sociopath" than Benedict Cumberbatch's Sherlock.

*On a side note, I am impressed that King manages to create a close relationship between a 15 year old girl and a 50+ man that is truly a partnership of equals and doesn't have any of the creepiness that you might expect from such an age gap.

The story itself is less interesting to me than the character development, but was still a solid mystery. The mystery part actually takes a long time to show up. The first half of the book is focused on establishing Mary's character and her burgeoning friendship with Sherlock. Eventually the mystery shows up as an American Senator's daughter. She's rescued but then Holmes and Mary have to discover who is behind it. The specifics of the mystery are a bit fuzzy - like I said, I really wasn't reading this book for the mystery. But it features what you come to expect from a Sherlock Holmes book: disguises, travel, narrow escapes, a big villain, etc. Also like traditional Sherlock Holmes, the mystery feels like an intellectual exercise in deduction more than it does chasing bad guys.

Laurie R. King's Mary Russell series has won over a mystery hater like me. (Well, actually Benedict Cumberbatch won me over to anything Sherlock related, but still). As someone who is in love with Sherlock Holmes and also enjoys the Edwardian era, I loved this story. Best of all, it features a strong female lead who never takes second fiddle to the brilliant Sherlock Holmes.

Powell's Books (Support an Indie Bookstore!)
Posted by Alison Can Read at 12:01 AM