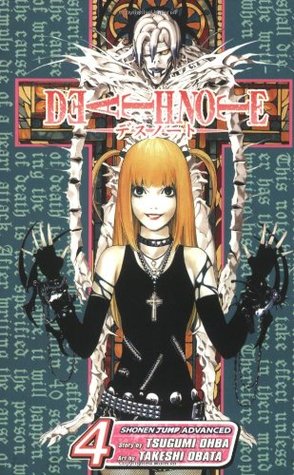 Love
With two Kiras on the loose, L asks Light to join the taskforce and pose as the real Kira in order to catch the copycat. L still suspects Light, and figures that this is the perfect excuse to get closer to his quarry. Light agrees to the plan in order to have free access to the taskforce resources. But when Light manages to contact the new Kira, he discovers that his rival is anything but as expected. Will Light escape from love unscathed? (courtesy of Goodreads)


This volume of Death Note focuses on the Kira imitator. Turns out her name is Misa and she is a 20 year old model who is seeking vengeance for her parents' death. Light is in a bind during this volume. He has to get Misa on his side but also keep their relationship a secret. Which is particularly difficult given that L's scrutiny of Light is only growing stronger.

I have conflicting feelings on Misa. She comes off as an amateur who makes big mistakes. But we learn that she's much smarter than she first appears and the "stupid" things she did were in fact calculated to throw people off. Unfortunately, her strength is marred by her insta-love for Light. She's desperate for his attention and it makes her look weak. I wonder if the author of this series was female whether she would be a stronger character.

Overall, this is another great volume. The lengths both L and Light go in order to catch or avoid Kira never fail to impress me. There are constant twists and turns. This series changes so quickly that if I get frustrated with something, it's over in just a few pages.