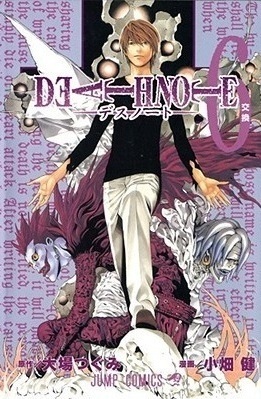 Give-and-Take
Although they've collected plenty of evidence tying the seven Yotsuba members to the newest Kira, Light, L and the rest of the taskforce are no closer to discovering which one actually possesses the Death Note. Desperate for some headway, L recruits Misa to infiltrate the group and feed them information calculated to bring Kira into the open. But the Shinigami Rem reveals to Misa who the Kiras really are, and, armed with this knowledge, Misa will do anything to help Light. But what will that mean for L...? (courtesy of Goodreads)


A stronger volume than the previous one, but it still suffers without Light consciously being Kira. His memory of being Kira is still wiped.

In this volume, Misa remembers that she is the second Kira. Actually, she doesn't remember but rather her shinigami tells her. I still hate Misa and kind of hope she dies soon, as heartless as that is. She's such a ditz and annoyingly refers to herself in the third person. On the other hand, she's calculating and intelligent - seemingly in spite of herself. She drives much of the plot of this volume.

It also appears that this volume concludes most of the third Kira - Yotsuba's involvement. The later portion of the volume is about trapping the person in charge of the notebook. It gets very exciting. Much in contrast to the earlier part of the volume which drags.

I'm really hoping that Light will return to his devious self in the next volume. I miss him.

**L = Sherlock? I see a lot of resemblance between L and the BBC's modern Sherlock. He's brilliant and also socially awkward. There are even similarities between L and Sherlock's unusual physical movements. In the first episode of Sherlock, Sherlock sits in a chair in the same odd squatting position with his feet on the chair itself. Exactly as L always does. I doubt it was a conscious choice by the makers of Sherlock (Death Note is older) but it's curious nonetheless.