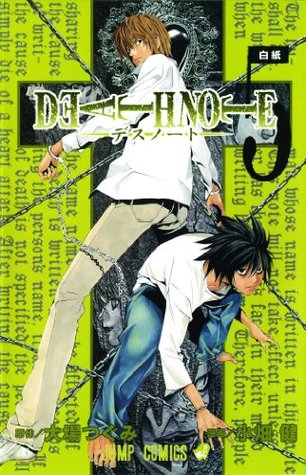 Whiteout
After a week locked up with no one but Ryuk for company, Light is ready to give up his Death Note and all memories of it. Freed from his past actions, Light is convinced he's innocent. But L is ready to keep Light under lock and key forever, especially since the killings stopped once Light was incarcerated. Then a new wave of Kira crimes hits Japan. Someone else has gotten their hands on a Death Note, and these new deaths aren't focused on making the world a better place, they're focused on making money. Big business can be murder, and Kira has gone corporate. (courtesy of Goodreads)


This is the weakest volume yet of Death Note. It's still far smarter than most manga or novels that I've read, but doesn't rise up to the level of its predecessors.

The intelligent Light's absence is the main cause for the decrease in quality. Light gets rid of the Death Notebook (presumably temporarily) which means that he's completely forgotten that he is Kira. This change in personality is so drastic that L knows something is up. Instead of thinking Light is Kira, L thinks that Kira may have controlled Light - or that Light really is Kira and is a great faker.

But without Light's scheming juxtaposed with L's ingenuity the volume drags. We have far too much Misa, who is a complete idiot and a love-sick, simpering fool over Light. There's also too much wobbling over whether members of the Kira task force should quit the police force.

It's unfortunate, because the addition of a 3rd Kira - a ruthless corporation out to make money - should make things a whole lot more interesting. I'm hoping the next volume gets back to solid footing and focuses on things that actually move the plot.