Princess for Hire by Lindsey Leavitt 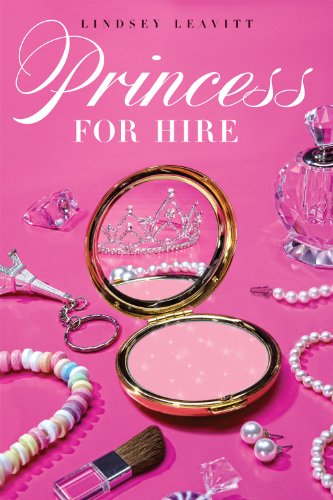 When Desi Bascomb gets discovered by the elite Facade Agency–royalty surrogates extraordinaire–her life goes from glamour-starved to spectacular in a blink. As her new agent, Meredith, explains, Desi has a rare magical ability: when she applies the ancient Egyptian formula “Royal Rouge,” she can transform temporarily into the exact lookalike of any princess who needs her subbing services. Dream come true, right?

Well, Desi soon discovers that subbing involves a lot more than wearing a tiara and waving at cameras. Like, what do you do when a bullying older sister puts you on a heinous crash diet? Or when the tribal villagers gather to watch you perform a ceremonial dance you don’t know? Or when a princess’s conflicted sweetheart shows up to break things off–and you know she would want you to change his mind?

In this hilarious series debut, one girl’s dream of glamour transforms into something bigger: the desire to make a positive impact. And an impact Desi makes, one royal fiasco at a time. (courtesy of Goodreads)

Princess For Hire is 240 pages of pure, unadulterated cuteness. If you want a book that will bring a smile to your face and brighten up a tough day, you need to pick up this book.

Desi Bascomb is a nobody. First off, she lives in nowheres-ville Idaho. She's not the beauty queen her mom wishes her to be. Her former best friend hates her because Desi's dad got her dad sent to prison. Her crush, the handsome, most popular boy in school doesn't know she exists. And to add insult to injury, she has to dress up in a groundhog costume for her job at the pet store.

Desi really makes this book. Despite having the typical low self-esteem of a normal teenager, Desi is independent, brave, and outspoken. She always has a question in mind and is willing to speak up when something isn't right (except around her classmates). I also loved her hobbies - classic movies and designing T-shirts - refreshingly different for YA characters.

The plot is adorable. Being able to magically transform into a princess look-alike just with the application of "Royal Rouge" sounds like it would be stupid, but Leavitt makes it work. She establishes a world where the idea of Royal Rouge seems believable - or at least has a well thought out creation story. I loved meeting all the different princes and princesses, seeing their different personalities, and their different lives.

It was great seeing how Desi reacted to her princess' lives. Not content to just play pretend, Desi tries to make things better. It's totally in keeping with her personality, but perhaps not what Facade Academy has in mind for its Subs. Creates conflict. It was also nice to see how Desi changed as a girl through living her princess's lives. If you can stick up for yourself when you're pretending to be someone else, maybe you can stick up for yourself too.

While the plot itself is original, the direction of the story isn't overly surprising. Also, a few characters such as Meredith and Lilith were a bit too cardboard for me. The flaws aren't a big deal though. When I started Princess for Hire, I expected a cute, sweet book that would follow a relatively predictable path and that's what I got. Thoroughly enjoyable.