Current Giveaway on Alison Can Read
GIVEAWAY: Win a copy of Walk The Wild Road by Nigel Hinton
Original Sin by Lisa Desrochers
July 5th 2011; Tor Teen
*I received a free copy of this book in exchange for an honest review. 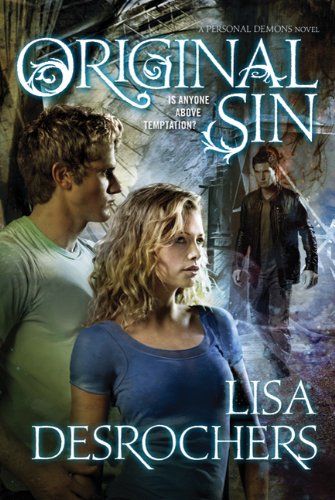 Luc Cain was born and raised in Hell, but he isn’t feeling as demonic as usual lately—thanks to Frannie Cavanaugh and the unique power she never realized she had. But you can’t desert Hell without consequences, and suddenly Frannie and Luc find themselves targeted by the same demons who used to be Luc’s allies.

Left with few options, Frannie and Luc accept the protection of Heaven and one of its most powerful angels, Gabe. Unfortunately, Luc isn’t the only one affected by Frannie, and it isn’t long before Gabe realizes that being around her is too…tempting. Rather than risk losing his wings, he leaves Frannie and Luc under the protection of her recently-acquired guardian angel.

Which would be fine, but Gabe is barely out the door before an assortment of demons appears—and they’re not leaving without dragging Luc back to Hell with them. Hell won’t give up and Heaven won’t give in. Frannie’s guardian exercises all the power he has to keep them away, but the demons are willing to hurt anyone close to Frannie in order to get what they want. It will take everything she has and then some to stay out of Hell’s grasp.

And not everyone will get out of it alive.

I go back and forth on this series. The plot and characters are over the top and a bit silly at times - although not purposely so. I especially find the use of Hell cliches to be overdone and somewhat annoying. I also hate that Grandpa says "Ya" instead of "You." That being said, if I put my surface-level level frustrations aside, I really like this series. Personal Demons was a fast paced story with a steamy romance between Frannie and Luc and a potential one between Frannie and Gabriel. Original Sin is just as interesting and the romance goes up a notch.

Frannie has a new guardian angel, her brother Matt, who died as a child. Everyone is thrilled about this. Frannie gets to be with her brother for the first time in 10 years. Matt has a cush angel job. Gabriel and Luc know that Matt will watch Frannie like a hawk. Or will he? It seems that being in the human world is fraught with challenges for a newly-minted guardian angel. Matt can still hate, love, lust, and envy. Those combination of emotions make for a much more compromised guardian than anyone expected. I love how the author has created angels who are not always angelic. We see this somewhat with Gabriel who can barely keep himself away from Frannie. But the capacity for human emotions and mistakes is much more apparent with Matt. A nice twist on standard angel mythology.

Luc became human at the end of Personal Demons. Hell is less than thrilled about this. Hell bent on revenge, you might say (eek...even I'm starting to use the Hell cliches). We get to know the various demons better. We see just how devious they can be in enticing people to sin.

I love Luc. I do miss the arrogant demon, but as a human, he's such a sweet guy - so devoted to Frannie. Unfortunately, King Lucifer didn't become lord of Hell by being stupid, so he knows just how to concoct a scenario that has the potential to bring down Luc and destroy his relationship with Frannie.

And then there's Gabriel. I like that he's an angel, but seems human as well. I wish they'd explored the history between Luc and Gabe better. I hope future books do that. Gabriel is actually gone for much of this book. The love triangle was more of a straight line. This was different from many second novels, which is where love triangles often develop or strengthen. I like that the author did something different. I also like that this isn't exactly a love triangle. Frannie isn't torn between Luc and Gabe, but there's still something there. More intriguing.

I'm not a huge fan of Frannie. I'm not sure why. I like that she's a forthright, take-charge girl in most parts of her life. She does what she feels to be right and isn't purely stuck on a guy. At the same time, she seems so wishy washy in her feelings for Luc and Gabe. This is understandable, but still annoying.

Overall, Original Sin is just as fun as Personal Demons. It moves the plot of the series along nicely. It does drag at times, but mostly it's a good pace. I really like how the book diverges from the typical paranormal path in many areas. It shows the importance of choice as well as the consequences. I was also pleased that the book answered some of my questions about Frannie's family - quite interesting. The ending leaves us chomping at the bit for Book 3.