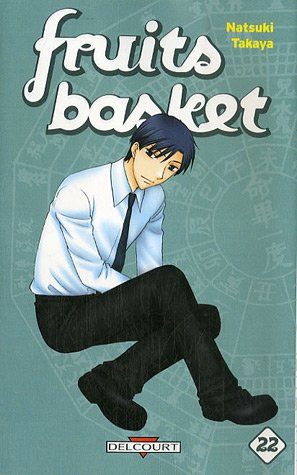 Kyo finally makes the decision to stop running from his fears and confront his birth father. But how will he react to his father's pressure to accept an unwanted truth? Meanwhile, as Akito's control over the Sohma family slips away, will the last vestiges of her sanity and reason slip away as well? (courtesy of Goodreads).

*My "reviews" of manga are a combination of a summary and a review. It's hard for me to really talk about a volume of manga without going in depth with the plot. So if you're really concerned about spoilers, beware.

Kyo begins the volume by confronting his father, who is a hateful person, like all the adults in this story. Kyo essentially tells his dad that he's going to live his life the way he wants to. Then Kyo confronts Akito, and she essentially sets him free. His curse isn't lifted at this point, but she tells him that she won't confine him and makes plans to destroy the cat's isolation room.

Tohru gets out of the hospital and Kyo finally gets to see her. Poor Tohru is convinced from their last conversation that Kyo doesn't want her. He has to work pretty hard to convince her otherwise. Meanwhile, they realize that Kyo's curse has lifted. They can safely embrace. Kyo breaks the beaded bracelet that was holding in the monster within.

The curse lifts on all the Zodiac members at the end of the volume. It's heart-wrenching to see the sadness and loneliness that overtakes them. The Zodiac was a bond as much as it was a curse. None of them know how to live free and alone. I loved the facial expressions that Takaya drew.

The best part of this volume is the very end, when the real story of the Zodiac is told. The one that all the cursed members had forgotten. The cat wasn't the foolish one at all in the real story. The cat was the smartest, the most loving, and the bravest. The others turned against the cat when they realized that it made the decision they should have.

This volume was an emotional roller coaster. It pulls on the reader's heartstrings. But it's the best kind of emotional book - you go up and down, but end up feeling satisfied and positive.
Posted by Alison Can Read at 6:27 AM