Current Giveaways on Alison Can Read 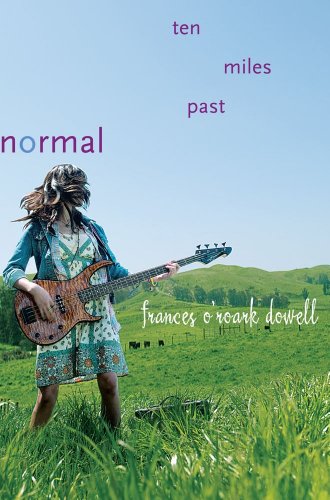 Janie Gorman wants to be normal. The problem with that: she’s not. She’s smart and creative and a little bit funky. She’s also an unwilling player in her parents’ modern-hippy, let’s-live-on-a-goat-farm experiment (regretfully, instigated by a younger, much more enthusiastic Janie). This, to put it simply, is not helping Janie reach that “normal target.” She has to milk goats every day…and endure her mother’s pseudo celebrity in the homemade-life, crunchy mom blogosphere. Goodbye the days of frozen lasagna and suburban living, hello crazy long bus ride to high school and total isolation--and hovering embarrassments of all kinds. The fresh baked bread is good…the threat of homemade jeans, not so much.

It would be nice to go back to that old suburban life…or some grown up, high school version of it, complete with nice, normal boyfriends who wear crew neck sweaters and like social studies. So, what’s wrong with normal? Well, kind of everything. She knows that, of course, why else would she learn bass and join Jam Band, how else would she know to idolize infamous wild-child and high school senior Emma (her best friend Sarah’s older sister), why else would she get arrested while doing a school project on a local freedom school (jail was not part of the assignment). And, why else would she kind of be falling in "like" with a boy named Monster—yes, that is his real name. Janie was going for normal, but she missed her mark by about ten miles…and we mean that as a compliment.

Frances O’Roark Dowell’s fierce humor and keen eye make her YA debut literary and wise. In the spirit of John Green and E. Lockhart, Dowell’s relatable, quirky characters and clever, fluid writing prove that growing up gets complicated…and normal is WAY overrated. (courtesy of Goodreads)

Please welcome Frances O'Roak Dowell to Alison Can Read. Thank you so much for answering my questions!

1. Janie is at the age where everything your family does is humiliating. Things that you won't care about in two years seem incredibly embarrassing around age 14. Was there anything that your mother and father did that really embarrassed you as a kid?

Well, they existed, and I found that highly problematic. But other than cheering too loudly at my volleyball games, they showed a lot of self-control for parents.

2. I love that Janie's mom has a popular blog. The mom/house-wife blogging community is huge. What are some of your favorite blogs in that genre?

I love the Pioneer Woman, and there’s a British blog called Domesticali that I adore. For a different take on the mommy blog, there’s Irretrievably Broken, an incredibly well-written blog by a woman who’s just been through a pretty painful divorce. She writes like a dream. And I’ve grown attached to Shiny Red Houses, a hilarious blog written by a homeschooling mom.

3. What do you think Janie will be when she grows up?

4. What is your writing process? Are you an outliner or a spontaneous plotter?

Spontaneous plotter. I just sort of feel my way along blindly until I figure things out. I couldn’t outline my way out of a paper bag. It used to drive me crazy in school when we had to outline papers before we wrote them. How could I know what I was going to say until I said it?

5. The other books you've written have mainly featured younger characters. How is writing for middle grade different than young adult?

You have more freedom in writing for young adults. You can confront the realities of life a little more directly. You have to be more careful writing for middle graders. You want to be realistic, but not disturbing. l You can use profanity in YA, although I didn’t, unless you consider “sucks” profanity, which I sort of do. Kids who are reading middle grade fiction are often in that strange place between the dreamworld of early childhood and the larger understanding that young adult will have. Middle grade characters need to occupy that space as well.

6. Please name two books that people should read after finishing Ten Miles Past Normal. Preferably one older novel (perhaps something you liked as a kid) and one contemporary novel.

A book I loved as a kid is The Changeling by Zilpha Keatley Snyder, a wonderful story of friendship and imagination. One of the best books I’ve read in the last few years is The Known World by Edward Jones. Amazing. All of his stuff is amazing.

Ten Miles Past Normal is a delightful book, refreshingly different. From the moment, I began reading the book, I loved Janie's voice. She feels so real. She's right at that difficult age. Where you don't know who are you or who you want to be, but you know that you're not nearly as cool as you should be. Janie is navigating her freshman year with varying degrees of aplomb. She's at an immediate disadvantage, because she lives on a farm. She starts out the year by accidentally coming to school with goat poop on her shoe and stinking up the entire bus.

Janie can be a somewhat frustrating character. She is fixated on the goat poop incident and all the various little things that make her uncool. It makes her afraid to do anything in high school. And she is convinced that living on the farm is the worst thing ever, which turns into complete disdain for her family. As annoying as that can be, doesn't it feel just like a 14 year old?

I enjoyed watching Janie begin to break out of the mold. She makes new friends in the library, learns to play the bass and joins a band, and meets some interest guys, both good and bad. I liked the relationship between Janie and her long-time best friend Sarah. Janie slowly starts to realize that their friendship is and perhaps should change, that Sarah isn't right all the time.

The side characters were interesting. Sarah had a very forceful personality. It was interesting to see her image change as the book went on. She didn't go from a hero to a villain, but she went from perfect to someone who Janie liked but didn't absolutely rely on. Sarah's wild older sister Emma was also an interesting person. Her character wasn't really developed, but I liked seeing how both Janie and Sarah went from idealizing her to thinking of her as a real person. Monster (real name) was a very cool guy - wise and kind. I hated that he used poor grammar (e.g. "they was"). It bugs me when authors use poor grammar to give a stereotypical hick character (who often has real depth hiding inside) a unique voice.

On the down side, this book doesn't have much of a plot. The various incidents in the book are only loosely connected. I actually had to look up the summary of the book when I was more than halfway through, because I still couldn't figure out what it was about. I don't fault the book too much for that though. It's really a character study of a girl growing up. Normal life doesn't have a plot yet it can still be interesting. I enjoyed seeing Janie ride through the bumpiest road of teenager-dom and then emerge on the other side - concrete plot or no.