Kitchen Princess vol. 5 and 6 by Natsumi Ando and Miyuki Kobayashi

Volume 5 is an emotional roller coaster. Najika starts out on top of the world. She's found her flan prince - Sora. She couldn't be more enamored with him. But then there's Daichi. He loves Najika. She has feelings for him as well, but doesn't quite understand them

Najika is soaring through the National Western Confectionary Competition. Her talent for cooking and her superb taste give her a leg up over more experienced competition. She advances to the final rounds with a delicious sounding recipe for Castella. After this round of the competition she meets Sora and Daichi's father, the director of Seika Academy.  He hopes to put Seika Academy on the map with press of Najika's accomplishments. Things start going south when Najika overhears a conversation between Sora and his father. They just get worse from there as the ending comes with a bang.

Honestly, this series is getting pretty silly. It feels more like a soap opera with every page. That's not going to keep me from reading, but it's hard not to roll my eyes after awhile. 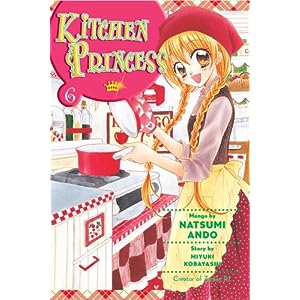 Volume 6:
Definitely spoilers - don't read this if you haven't read the earlier volumes

And you thought there was drama before...

The angst in volume 6 takes a turn for the extreme. We left volume 5 with news that Sora had been hit by a car. Volume 6 begins with Sora's untimely demise. This was not a surprise to me because I stupidly read the entire series' plot on Wikipedia (banging head against wall now).

Najika and Daichi are both reeling with grief at the loss of Sora. Najika loses her sense of taste - she can't cook, she can't eat. Her friends do all they can to try to help her regain her senses. Daichi is terrified that Najika will lose her place at the school since she lost the food competition. He volunteers to take over Sora's role as their father's protege. He becomes a straight-laced student body president - a middle-aged fifteen year old.

We meet Najika's new rival as the volume ends - Seiya was chosen by the school director to represent the school. He looks to thwart Najika at every turn. I am interested to see how Seiya's addition to Seika Academy affects the remaining three volumes.
Posted by Alison Can Read at 8:32 PM