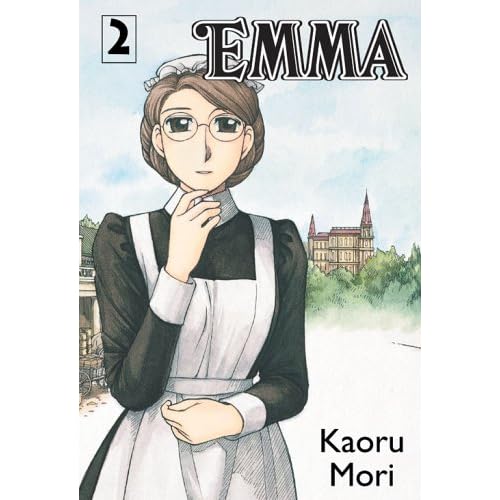 
Volume 2 of Emma is where the plot really starts to move. Three main things happen in this volume: Emma and William fall in love, Mrs. Stownar (Emma's boss and William's former governess) dies, and William's family disapproves strongly of Emma. Clearly, volume 2 is packed with substance. Yet I also felt that it was more of a transitory volume - getting in bits of action that are necessary to get us to the ultimate point. That's the point of all stories in a way, but there was so much going on in this volume, that it also felt like I was being bombarded with information from every direction.

I love how we see the contrast between the classes in this volume. We see Emma's background as an impoverished rag doll for whom working as a maid was a real step up in status. In another world, we see the splendors of a party with the Jones family, with fancy hair-do's, an elaborate dining table, and delectables such as sea turtle soup. The drawing style is distinct for each class. Depictions of the poor use more stark backgrounds and looser lines. The wealthy family's pictures have elaborate backgrounds and very careful, detailed lines to draw each character.

One thing that bugs me is Hakim: he's a great character, a wealthy Indian friend who seems to specialize in leisure and love. He pushes William and Emma's relationship forward, despite having pursued Emma himself. He professes confusion over why a rich man like William cannot be with a poor maid like Emma. I think it's quite unrealistic that an Indian man would not understand the complications of a cross-class relationship. I'd say the separation between classes in India both then and now were much larger and carried more weight than the separation of the classes in England.

Overall, I enjoyed how this volume moved the story along, but I doubt it will be my favorite of the series. I had some issues with it, but I still really enjoy the Emma series.
Posted by Alison Can Read at 7:16 PM