1. The Supernatural: This connection is both the most obvious and the most tenuous. Vampires don't exist and neither do humans who a cursed by the Chinese zodiac to shape-shift into representative animals. But aside from the fact that both series feature the supernatural, these elements have little in common. Twilight vampires are super-human with powers such as telepathy and clairvoyance and are innately dangerous to humans. The cursed Sohma family members really have no super powers other than shifting into animals and a little memory erasing. They are not dangerous to anyone other than themselves.

2. Bella and Tohru: The protagonists of the series share many characteristics. I think they'd get along well if they knew each other. Both are people pleasers. Bella lives to take care of others - her mom, her dad, Jacob, the Cullens. She wants to be helpful. Tohru also lives to serve. She delights in caring for the Sohma boys. She's like a little mother to them. Both Bella and Tohru have difficult family situations. Tohru is an orphan and lives with constant grief of her mother's death. Both Bella's parents are alive, but she spent much of her childhood essentially being the parent. The parent relationship is also a difference between Bella and Tohru. While both adore their mothers, when Tohru's mother was alive, she was the strongest presence in her daughter's life - a source of comfort and wise advice. Bella's mother seems to function as an example of what not to do. Tohru has two very close friends - Hana and Uo. In contrast, Bella has no close friends other than the Cullens and the wolves - she is friendly with Angela but she's more of an acquaintance than a confidant.

3. The Love Triangle: Bella pines over Edward and Jacob. Tohru has to choose between Yuki and Kyo. The boys are all hopelessly in love with the girl and in conflict with each other. Bella is about the same age as Tohru, but seems much older. Tohru seems absolutely clueless that Yuki and Kyo are head over heels for her. She also seems to be in love with both of them but doesn't realize it. Bella knows that she is in love with Edward. She doesn't realize until late in Eclipse that she also loves Jacob, but she just seems more "with it" than Tohru.

4. The Families: My favorite aspect about Twilight is also my favorite about Fruits Basket - the family dynamics. Both series feature a family with a secret, something that makes them different from everyone else. This draws the family unto itself. The family has its own infighting and drama to be sure, but the ties that bind them are inexplicably strong. I love getting to know each different family member of the Sohmas and the Cullens. Each character has his or her own story. 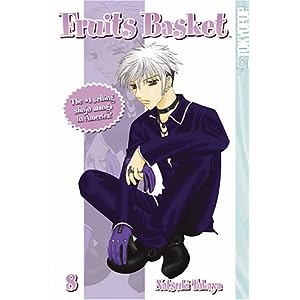 
Not as serious as the previous three volumes. Summer is approaching and it's almost vacation time. Good thing too, because Hatsuharu is going "black" - essentially turning into Mr. Hyde - and destroying school property.
This plotline is quickly eclipsed by our introduction to Ritsu, a gorgeous long-haired kimono-clad beauty. Tohru is excited to meet another female Sohma only to discover that Ritsu is a man! Ritsu is the zodiac monkey. His self-esteem is abysmally low. Even the tiniest reaction causes him to violently apologize and imbue himself with more self-hatred. This volume was my least favorite I've read. I didn't feel as emotionally connected to the characters.
Posted by Alison Can Read at 8:35 AM