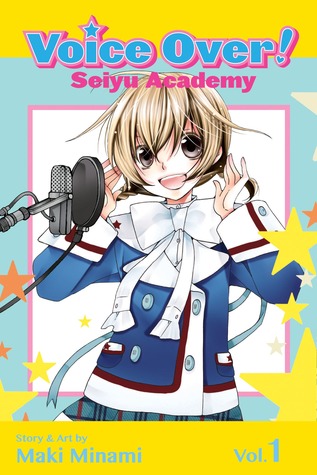 A new series by the author of the best-selling S•A!

Hime Kino’s dream is to one day do voice acting like her hero Sakura Aoyama from the Lovely?Blazer anime, and getting accepted to the prestigious Holly Academy’s voice actor department is the first step in the right direction! But Hime’s gruff voice has earned her the scorn of teachers and students alike. Hime will not let that stand unchallenged. She’ll show everyone that she is too a voice acting princess, whether they like it or not!!

To make matters worse, Sakura’s grouchy son, Senri, is in Hime’s class, and he seems determined to stomp on her dreams. He even has the nerve to call Lovely?Blazer stupid! But Hime won’t be deterred by naysayers, her new nickname (“Gorilla Princess”), or even getting demoted to the Stragglers group. She’s ready to shine, and nothing is going to stand in her way! (courtesy of Goodreads)


Voice Over is a series I grabbed at random from the bookstore. It's a pretty typical shojo manga. Plucky girl who's the underdog at her school. Boy interest who is jerky yet intriguing. It's formulaic, but a formula I often get a kick out of.

An initial comment...how odd that there's a high school focused on voice over acting work. Is that really a thing in Japan (or anywhere else?) It's so obscure. But anime is a really big deal there; maybe they really having something like that. I doubt it though. v
Hime seems like a nice enough girl. She doesn't stick out in my mind from other manga heroines. She's not particularly charismatic, particularly pretty, or particularly smart. She has the same determination in the face of adversity as most manga heroines, but that's about it. Her personality is weaker than many characters I've read. I don't dislike her, but she hasn't given me anything to like yet.

I did like that Hime wasn't an immediate, unqualified success. She did attract some attention for her voice over work, but it wasn't the kind she exactly wanted. And then when she tried to do some professional work, she failed completely. It's much more realistic than stories of people who are immediate successes at things they've never done before.

Voice Over isn't a stand-out manga, but it's also not objectionable. I'm curious enough to dabble in another volume or two.