I just got home tonight from my week-long trip to Oregon. I should be back to regular posting tomorrow, but in the mean time, I wanted to show off two of the coolest bookstores in the country. 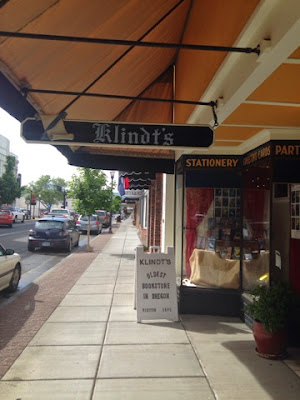 First, Klindt's in The Dalles, Oregon. My mother is from The Dalles. It's a town of about 10,000 people 90 minutes east of Oregon. It's right on the Columbia River surrounded by rolling hills, cherry orchards, and with Mt Hood in the near distance. 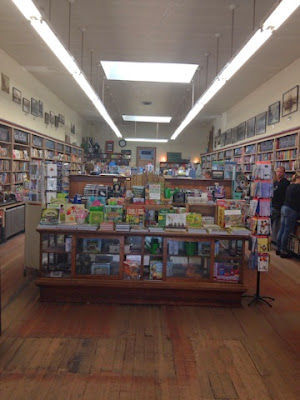 For an indie bookstore in a small town, it gets some amazing author visits. If you're anywhere near The Dalles on May 31 and you love Young Adult, you have to head over to The Dalles. Klindt's is hosting a Young Adult Fiction Festival with 12 amazing authors! Kendare Blake, Marissa Meyers, Teri Brown, Rosamund Hodge, Lish McBride, Mike Mullin, Anne Osterlund, Rosanne Perry, Trent Reedy, Lisa Schroeder, April Genevieve Tucholke, and Leslye Walton. Can you believe it?! What's more, four of these authors will be hosting creative writing workshops. 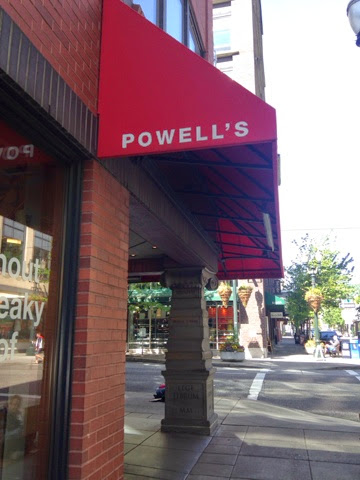 Moving onto Portland, you have the famous Powell's Books. Powell's is said to be the largest bookstore in North America. It takes up an entire city block! It has new and used books - as many as you could imagine. I particularly liked the staff recommendations, which featured books I've heard of and others that I haven't. 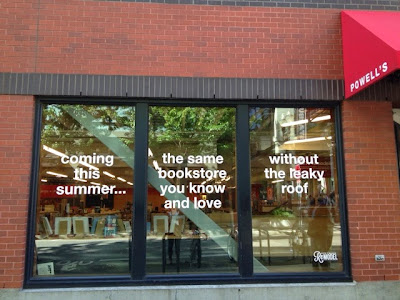 Powell's is undergoing a major renovation right now. I loved the sign. 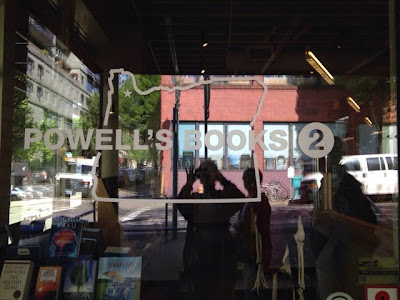 A giant store encompassing a city block isn't enough! Powell's has an overflow store next door. They also have several other locations: Powell's at Cedar Hills Crossing, Powell's on Hawthorne, Powell's at PDX (the airport), Powell's Technical Books, and Powell's Books for Home and Garden. (You can see me and my parents in the background of the photo)

I spent a long time browsing books, but I didn't actually buy anything. The only thing I bought was this cool t-shirt:

Have any of you been to Klindt's or Powell's? What are your favorite bookstores?