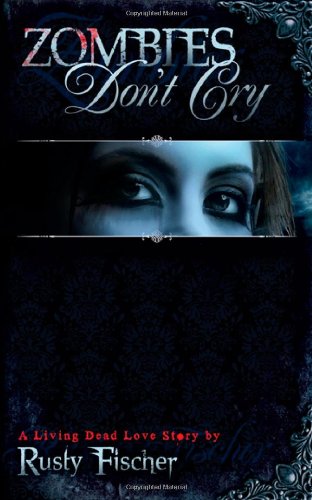 In the sleepy small town of Barracuda Bay, Maddy Swift leads the life of a fairly typical teenager, but while attending a party one night, Maddy is struck by lightning and awakens to realize she has been reanimated and turned into a zombie. While becoming acquainted with her new "lifestyle," Maddy stumbles upon two unexpected undead chaperones, fellow students Dane and Chloe, who begin to teach her the ways of zombie life, including defending the populace from Zerkers—the bad zombies. Together, on prom night, the three teens must ultimately defend Barracuda Bay High from an all-out zombie Armageddon. (courtesy of Goodreads)

I'll start by saying that zombies will never be my paranormal creature of choice. Not that there's anything inherently wrong with zombies, but while I can imagine kissing a vampire (a tame one), fairy, or wizard, I have no desire to touch lips with a zombie. My distaste for zombie-kind colors my review somewhat, but I really enjoyed Zombies Don't Cry.

I'll break the book down into its essential elements:

1. Maddie: I loved the main character. She's a very normal girl. It's refreshing to see someone who isn't overly angsty. She's the type of girl who dies, comes back to life as a brain-eating zombie, and still tries to keep her life somewhat normal. No endless sobbing streaks or vengeful rampages. Instead she goes home, goes to school, makes new friends, keeps the old, and tries to avoid her enemies.

2. Side Characters: I loved Dane and Chloe, two zombies who attend Maddie's school and take her under their wing. They're hilariously deadpan about almost everything. I also love that they're so nonchalant about most of their lives. It made the transition easier for Maddie and the reader. Stamp, Maddie's crush, is a sweet guy too. Very normal. Kind of boring but in a likeable way. Dahlia and Bones, the bad guys, are somewhat cardboard but functional as villains.

3. Zombies: Fischer stayed close to traditional zombie lore. They do indeed have to subsist upon brains. Fortunately, animal brains work as well as human brains. The zombies look dead. Extraordinarily pale, yellow teeth, wounds that don't heal, yet they have supernatural strength. Unlike standard zombies, Fischers zombies have a government of sorts. There are rules that you must follow to stay in the zombies' good graces. I loved the idea behind this. Unfortunately, I thought the book explained just enough to whet my appetite, but not enough to fill me up. Perhaps more would be explained if there are follow-ups.

4. Romance: This book is billed as a love story. There is definitely romance in this book, but it wasn't the main element. The story is framed around romance. Maddie dies on her way to a party to meet her crush Stamp. She and Stamp flirt and banter throughout the book working their way to something more. Enter boy two! Dane, one of Maddie's zombie mentors, is super nice and funny. Maddie likes Stamp, but does she like Dane too? This of course can be a whole plot unto itself, but I found the friendship and zombie lore far more interesting than the romance. Still, the romance was cute. I prefer books with a more developed romance story, but I think adding more to this book wouldn't have fit well with the plot.

5. Horror/Humor: Let me explain why I'm combining these inherently different categories. There is definitely horror in this novel. There is violence and, obviously, death. Maddie is in great danger from the Zerkers as are her friends. But I thought the horror was campy. I'm assuming this was intentional. It reminded me of a 1950s zombie movie. You're shocked at the bad things that are happening, but they're so silly that it's funny too. It's hard not to laugh at a potentially deadly zombie who scream "Eat Brains! Brains, eat!"

Zombies Don't Cry is, on the whole, a fun book. It was a bit silly, but written well enough that I felt connected to the characters and the story. A bookish alternative to the classic zombie movies.