I'm honored to be a part of the blog tour for Carrier of the Mark by Leigh Fallon. The book comes out on October 4, 2011. I read it last week and really liked it. I definitely recommend you all check it out!

Their love was meant to be.

When Megan Rosenberg moves to Ireland, everything in her life seems to fall into place. After growing up in America, she's surprised to find herself feeling at home in her new school. She connects with a group of friends, and she is instantly drawn to darkly handsome Adam DeRís.

But Megan is about to discover that her feelings for Adam are tied to a fate that was sealed long ago—and that the passion and power that brought them together could be their ultimate destruction.

Leigh Fallon was born in South Africa, raised in Dublin, Ireland, and moved to Cork in her twenties. While living in beautiful Kinsale, her novel, Carrier of the Mark, was conceived. She promptly abandoned her “riveting” career in corporate treasury and discovered Inkpop, a website for budding writers of teen fiction. Within weeks, her manuscript hit the coveted top-five spot and was reviewed by an editor at HarperCollins. A few emails and some hysterical screaming later, she signed her first deal. Leigh and her family now share their time between Ireland and the United States.

Next Stop: Be sure to stop by A Bookworm's Haven on Wednesday October 5 for the next stop on the tour! 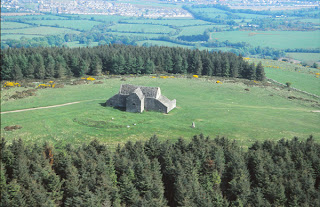 The DeRises house is an old farm house that is slightly outside Kinsale town. It’s just off the road that runs along the Bandon estuary, and is a bit off the beaten track. The house was once quite beautiful, but time has withered its beauty, but it has a warm homely vibe to it and an air of old faded decadence. Out the back of the house is a walled courtyard, surround on all sides by old walls and a ruin of a tower, and on one side are the gates to the yard from the drive that leads in from the road.

In the Carrier of the Mark, the DeRises house had been in their mother’s family for years. It was built way back on Echoed lands, meaning it is protected. Because of the age of the house and the history that goes with it, there are lots of rumors about the land and the families that have lived there. People tell haunting stories of strange things that have happened over the years. 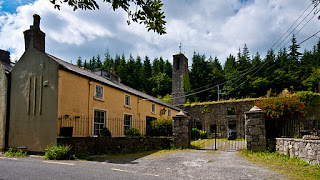 My inspiration for this house actually came from a house near where I grew up in Dublin. I lived in the Dublin Mountains. Up through the woods from my home, in Killakee, there is a house (it’s now a restaurant) called Killakee House. It is a really old place that has lots of history around it. Just up the road is the Hell Fire Club, an old ruin sitting right on the top of the hill where nothing will grow within a certain radius of the ruin and where there is always a smell of burning. *shudder* It is said the Devil himself appeared here and burned the place down. It’s really quite creepy. The Killakee House itself is said to be linked to the Hellfire Club and has its own creepiness. It’s said to be haunted by a big black cat with orange eyes. There are rooms in this building that are permanently freezing, and people have fled screaming on many occasions. They’ve done a couple of exorcisms here to try and ‘cleanse’ the place, but the ghosts don’t seem to want to leave. Wooooo!

Some of my scariest memories are of Halloweens spent doing ‘ghost walks’ around Hellfire. You can’t imagine it’s eeriness until you’ve walked around the freaky ruins in the pitch dark with a low lying mist swirling around you on All Hallows Eve. Ooohh I’ve got the shivers even thinking about it.
Posted by Alison at 6:00 AM