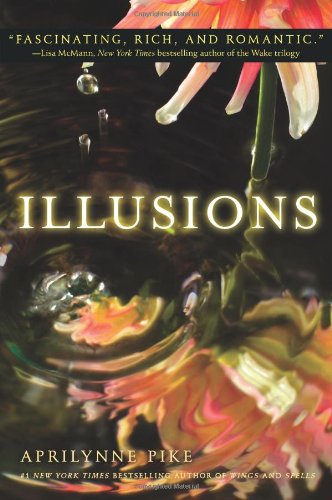 Laurel hasn't seen Tamani since she begged him to let her go last year. Though her heart still aches, Laurel is confident that David was the right choice.

But just as life is returning to normal, Laurel discovers that a hidden enemy lies in wait. Once again, Laurel must turn to Tamani to protect and guide her, for the danger that now threatens Avalon is one that no faerie thought would ever be possible. And for the first time, Laurel cannot be sure that her side will prevail. (courtesy of Goodreads)

I read Wings, the first book in the Wings series, a few years ago and was blown away by the fresh take on fairies, likable characters, and intriguing plot. The second book, Spells, was good but too scattered for my taste. Illusions, the third book in the series, is better than Spells but fails to reach the level of excellence Wings achieved.

I continue to love Pike's version of fairies. Pike takes the basic framework of traditional fairy lore and adds to it. The fey are even more closely tied to nature than is traditional and the class system, politics, and magic is unique yet still in keeping with what you'd expect of the fey.

The best part of Illusions is that the book alternates between Tamani and Laurel's points of view. Laurel's knowledge of fairy-land is still very limited. I understand the world much better by seeing through Tamani's eyes. There is much that Laurel doesn't see about his daily life and now the reader learns what Laurel misses. Also, Tamani's point of view is useful to Illusions since significant portions of plot take place away from Laurel.

A new character is introduced in Illusions: Yuki, another fairy living among mortals. Laurel's acquaintance Klea (friend or foe?) looks after Yuki and puts her into Laurel's school. Tamani befriends her to keep an eye on her. Nothing more. Or is it? The reader knows how Tamani feels, but Laurel doesn't. Let the drama ensue...

Here we get to my issue with Illusions. It's too love triangley. Or love rectangley. Laurel is still torn between David and Tamani. The boys, David especially, can barely tolerate each other. Laurel gets her own taste of jealousy with Yuki. She can't stand Yuki being around Tamani, even though Laurel's still dating David. Drama! The romantic tension fits with the plot and does reach some sort of conclusion by the end of the book. But it's such an overdone plot device that it was hard not to roll my eyes at various points in the story. (On the up side though, there are a few fabulous romantic scenes in Illusions that made me squeal.)

I was happy that the story was more focused in this book, rather than trying to accomplish too much as did the second book. But now, instead of writing too much in too few pages, it felt like there was too little in too many pages. It dragged at points. Nevertheless, the ending was very intriguing. I can't say I loved Illusions, but it left me excited to see where this series ends up in the fourth book.