The Luxe by Anna Godbersen

The Luxe by Anna Godbersen
2007; HarperCollins 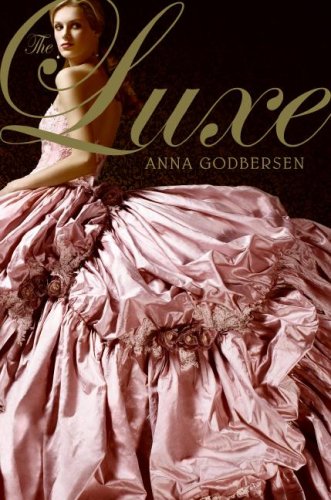 In the self-contained world of young Gilded Age Manhattan socialites, Elizabeth and Diana Holland reign supreme. Or so it seems. Scratch the surface, though, and you can detect festering jealousies that threaten to topple them. Elizabeth suffers a more literal fall when her carriage overturns and she is carried away by the swift East River current. (courtesy of Goodreads)

The Luxe is a turn of the century Gossip Girl - turn of the 20th century, that is. Life is more formal and class-based in 1899 New York City. The old class Dutch-American aristocracy is waging a cold war with the upstart nouveau-riche Industrialists. And beneath them both, the servants who work for them are struggling to break the barriers that separate the classes. We see all of these characters in The Luxe. Elizabeth, the paragon of virtue and blue blood, has to choose between her place in society and her secret passion. Diana, her little sister, who is in her sister's shadow. Penelope, filthy rich, ambitious, wants everything Elizabeth has and will drag her down to get it. Henry, a playboy who has to choose between family obligations and fun. Lina, the maid who hates her work and her mistress.

I quite enjoyed The Luxe, but it is not without flaws. The characters and plot were rather formulaic, but no more than most chick lit. I loved the rich descriptions of Victorian fashion and architecture. But the prose felt a little overdone at times - like a bad romance novel (e.g. "Elizabeth extended her long, slender neck...). Despite living 100 years earlier, the lifestyles of these characters were not very different from the Gossip Girl set. If you want to read about the sordid lives of the young and rich, The Luxe is a more tasteful way to go than Gossip Girl. The plot is nothing special, but it's still fun to read.

The book never really sucked me in, but it did grow on me. It was hard to get into the story, but once I did, I was just interested enough to keep going. I'd characterize the book as slow and steady. Never a page turner, but there's always enough there to make you want to continue.

I realize that my review has more criticism of the book than praise, but I really do think it's worth reading. It's never going to win any awards, but it's a good book. My reservations about the book are the same issues I have with most chick lit/Gossip-Girl-ish books. But I read them anyway. I would recommend The Luxe - as long as you go into it expecting a fun, gossipy read.