Guest Post: Author Barbara Casey of The Cadence of Gypsies

The Cadence of Gypsies by Barbara Casey

Please welcome Barbara Casey to Alison Can Read. She has a new book called The Cadence of Gypsies and was kind enough to guest post on the blog today. 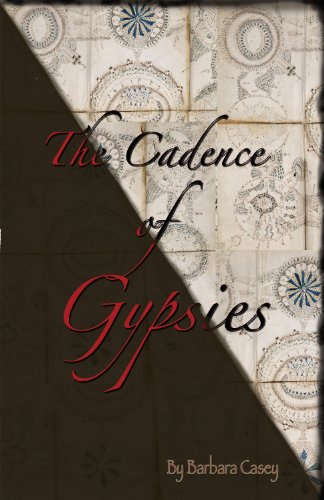 Check out The Cadence of Gypsies!

On her 18th birthday Carolina Lovel learned that she was adopted and was given a letter written by her birth mother in an unknown language. After years of research she travels to Italy on a mission to find the truth about her past. Carolina is accompanied by three extremely gifted but mischievous students the FIGs from Wood Rose Orphanage and Academy for Young Women. In an effort to help their favorite teacher, the FIGs will have to use their special abilities to decipher the Voynich Manuscript, the most mysterious document in the world, and the one thing that is strangely similar to what Carolina was given. Their search will take them into the mystical world of gypsy tradition and magic, more exciting and dangerous than any of them could have imagined. (courtesy of Goodreads)

Imagine not finding out you were adopted until your 18th birthday. Imagine learning also that
your birth is somehow tied in with the most mysterious document in the world: the Voynich
Manuscript. This is what happens to Carolina Lovel, one of my characters in The Cadence of
Gypsies, and what she discovers changes her life forever.

In reality, my story of Carolina and her three precocious students is fiction. But the Voynich
Manuscript is real. Here are some facts that might interest you:

-Throughout its recorded existence, cryptographers, including some top American and British
code breakers of World War II, have been doing statistical analysis of letter and word use,
repetitive patterns, and other tools in an attempt to decipher the manuscript. All attempts have
failed.

-The parchment pages of the Voynich Manuscript were made from animal skin. In February
of this year, Greg Hodgins, a chemist and archaeological scientist, was able to use radiocarbon
dating on tiny bits of the pages extracted with a scalpel to determine that the book dates back
to the early Renaissance, between 1404 and 1438. This makes the book a century older than
scholars had previously thought.

-The manuscript is small, seven by ten inches, with nearly 235 pages and is made of soft, light
brown vellum. It is believed to have originally contained 272 pages. A quill pen was used for
the text (written from left to right) and figure outlines, and vibrant washes in various shades of green, brown, yellow, blue, and red were applied to the figures, possibly at a later date.

- The contents of the Voynich Manuscript are divided into six divisions or sections:

The first and largest section is the botanical. It contains 130 pages of plant drawings with
accompanying text.

The second section contains 26 pages of drawings which are obviously astrological or
astronomical in nature.

The third section contains 4 pages of text and 28 drawings, which would appear to be
biological in nature.

The fourth section contains 34 pages of drawings, which are pharmaceutical in nature.

The last section of the manuscript contains 23 pages of text arranged in short paragraphs,
each beginning with a star. The last page (the 24th of this division) is thought to be the “Key.”

-There have been many theories as to who wrote the Voynich Manuscript. Englishman Francis
Bacon, inventor/artist Leonardo da Vinci, occultist and mathematician John Dee, and even
extraterrestrials have been named as possibilities. But to date, there is no proof of authorship, and computer analysis of the Voynich Manuscript has only deepened the mystery.

In The Cadence of Gypsies, Carolina and the three FIGs (Females of Intellectual Genius)
discover what they believe to be the truth about the Voynich Manuscript and how it is entwined
in Carolina’s life. Maybe what they discover is closer to reality than anyone realizes…
Posted by Alison Can Read at 7:16 AM