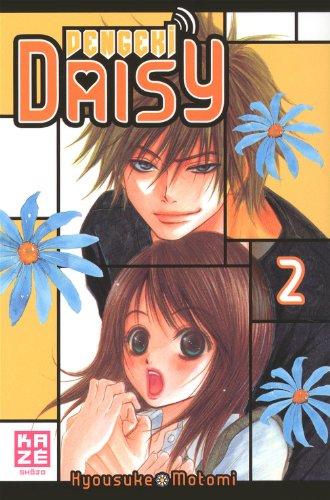 Teru, a poor and kind girl, recently lost her older brother, her only remaining relative. Before he died, he gave her a cell phone connecting her to a person he said would support her if ever he were unable to. As time passes she is cheered on by text messages sent from this enigmatic person, known only as Daisy. But one day, through an unexpected incident as Teru begins working for the delinquent school janitor, Kurosaki, she starts to question Daisy's identity. Daisy may be closer to Teru than she thinks. (courtesy of Goodreads)

The best thing about second volumes is that you already know the characters and plot and don't have to waste time learning a new world. The worst thing, if you haven't read the prior volume in awhile, is being thrown into a story whose plot and characters you barely remember. Luckily, Dengeki Daisy vol. 1 was still fresh enough in my mind that I easily fell back into the play-by-play between Teru and Kurosaki.

Teru is temporarily living with Kurosaki after a burglar broke into her apartment. She feels awful for imposing on him and is embarrassed that she's falling in love with him. Kurosaki is afraid that Teru's proximity to him will lead her to discover that he is Daisy. And he is also more attracted to her than he should be.

Kurosaki deals with his infatuation with Teru and the necessity of protecting his identity by behaving rudely and treating Teru like a servant. Teru vascillates between being grateful and subservient and making snarky remarks - she loves telling him to "go bald." I love that Teru is a genuinely nice girl who feels deeply, yet doesn't seem weak.

A new character comes into the story in Vol. 2: Riko Onizuka. She is a new school counselor, but is actually assigned by Teru's deceased brother to protect Teru alongside Daisy. Her character played a prominent role in the plot climax of the story, but I don't think she'll really be important until the next volume.

Danger is still part of Teru's life. People are desperate to find the unpublished software that Teru's brother died with. Everyone assume (probably correctly) that she has the software somewhere. Riko and Kurosaki are there to save Teru when the bad guys show up. But I love that Teru isn't helpless. She packs a punch of her own.

I continue to like the artwork in this manga. At first, some of the overdramatization annoyed me. The characters look positively demented when they're angry and very emotional. But I've grown accustomed to it. What I really love are the scenes when Teru and Kurosaki dare to show their love for one another. The pure passion that is displayed is enough to make my heart stop. I especially love the cover page to chapter 5, p. 34-35, 74, and 150-155. If you're ever looking for a simple, elegant, no-words-necessary depiction of love, look no further than these pages.
Posted by Alison Can Read at 7:42 PM