Kitchen Princess vol. 3 & 4 by Natsumi Ando and Miyuki Kobayashi
Thoughts on Najika, the main character:
I really like Najika. She is sweet and kind, a stereotypical "good girl." But she also has spirit - we see her temper, her cunning, and her humor. Since my manga experience is mostly limited to Fruits Basket and Kitchen Princess, I cannot help but compare Tohru and Najika. Fruits Basket is a more mature series. As a whole, the characters go through more serious situations an emotional struggles than do the characters in Kitchen Princess. But Najika seems more real than Tohru. Najika is not nice 100% of the time. The only hint of depth to Tohru's character we read is her extreme sadness at her mother's death and her constant recitation of her mother's wise advice. But otherwise, she is so unfailingly nice that she seems fake. Najika has also struggled with the loss of her parents. And she is terribly homesick over leaving her orphanage and its headmistress, who treated Najika like her own. Her sweetness, when balanced by a temper creates a more three-dimensional character. 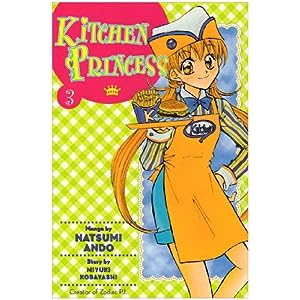 Kitchen Princess Vol. 3:
At the start of this volume, we learn more about Sora and Daichi. It turns out the brothers are at odds, in large part, because Sora approved of his father's remarriage while Daichi disapproved. Akane spies Sora and Najika having a tender moment. Even though she has a crush on Daichi, Akane can't stand Najika being loved by either brother. She plots to shut down Fujita Diner, the diner where Najika cooks, as revenge.The board of trustees of the school is about to shut down Fujita Diner when Najika and Fujita-san wow the board with rolled sandwiches. It turns out that lazy Fujita is a classically French-trained chef who can be very charming.

The book continues with a trip home to Hokkaido where Najika tends to her ailing orphanage headmistress. Najika has a real way with kids - she is nice and empathetic but can also be strict when necessary to get kids to behave. Najika is truly happy in the orphanage tending to her "family."

Najika begins to wonder if Sora or Daichi is her Flan Prince. Why she didn't wonder this before, I don't know...she's a bit slow. :-)  But she's still utterly clueless that Sora and Daichi are both in love with her. Akane has definitely noticed though. She does her best throughout the book to thwart Daichi's interest in Najika. 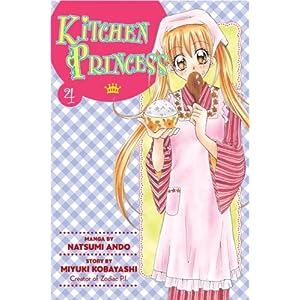 Kitchen Princess Vol. 4:
Najika is thoroughly confused at the start of this volume. Daichi is cold and distant all of a sudden and Najika doesn't know why. It turns out to be a big love-triangle confusion. Daichi bought Najika a new watch, but Akane took it instead and told Daichi that Najika gave it to her. Then Sora gave Najika a watch as well! Much confusion. Things settle themselves out and Akane's duplicity is discovered.

Akane and Najika have a blowout in the cafeteria. Najika drops the niceties for a few minutes and tells Akane what she really thinks of her. Akane is publicly shamed before the entire school. Najika's mean-side disappears like smoke. Soon enough, she is making a special dessert for Akane to use in a food competition.

Sora makes a big announcement in this volume. He confesses to Najika that he is her Flan Prince - he rescued her from the river in Hokkaido. Daichi is furious with Sora for his admission and with Najika for loving him. Why is Daichi upset? Is Sora telling the truth? Or is Daichi just jealous? We shall see...
Posted by Alison Can Read at 7:10 PM