I'll warn you - this is a very long post. But I hope it's informative and gives you a lot of information about a popular manga series. 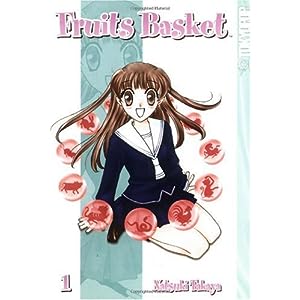 
Fruits Basket was my first foray into manga. Numerous websites recommended the series as a good intro to manga, so I picked it up. I've read the first four volumes thus far. Fruits Basket, also known as Furuba, was published between 1999 and 2006. The series totals a huge 23 volumes! (at least that seems very large to me). It is published in the U.S. by TokyoPop and is rated T for Teen. I think younger teens would be most likely to pick it up.
The series begins with Tohru Honda in a tent. Tohru's mother recently died and her grandfather can no longer house her. She doesn't want to attract attention, so she goes to school like normal by day and lives in a tent at night. One day her handsome classmate Yuki Sohma discovers her hideaway. It turns out that Tohru set her tent down on Sohma land. They work out an interesting solution to Tohru's problems. She will live in Yuki's home in exchange for housekeeping and cooking duties (Tohru doesn't want to be a charity case and the Sohma boys desperately need a girl around). So Tohru goes to live with Yuki and his cousins Shigure and Kyo. 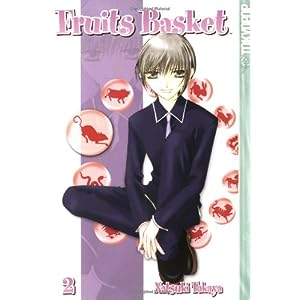 Tohru quickly learns that the Sohma's are no ordinary family. Each member is possessed by a spirit of the Chinese zodiac. Whenever they are hugged by someone of the opposite gender, they turn into their zodiac animal. Tohru discovers this the hard way. Normally, anyone who learns the Sohma's secret has his or her memories erased. But the Sohma's decide to let Tohru in on their secret.
Main Characters 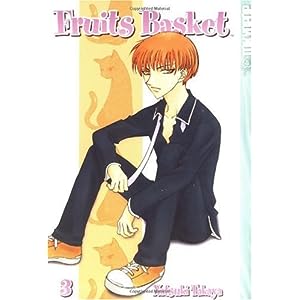 Tohru Honda: The main character. The only outsider to know the Sohma's secret. As nice as can be. Loves taking care of people, cooking, cleaning, and mothering the Sohma boys. A loyal friend to Arisa and Saki, her best girlfriends. Misses her mother terribly.
Yuki Sohma: Zodiac animal: The rat. The first Sohma Tohru meets. Known at school as Prince Charming. Handsome and kind. But shy, lacks self-confidence, and is socially inept. Clearly head over heels for Tohru.
Kyo Sohma: Zodiac animal: The cat. Brash and short-tempered. But also charismatic and makes friends easily. Orange-hair. A trained fighter. Main goal in life is to beat Yuki (the rat) in a fight. Also head over heels for Tohru. Tohru brings out his soft side.
Shigure Sohma: Zodiac animal: The dog. Owns the house where Tohru, Yuki, and Kyo live. A novelist. Writes trashy romances. His character is described as sometimes perverted but basically a nice guy. "Perverted" in the sense that he often speaks in double entendres - not "perverted" in the common usage.
There are other characters introduced the first four volumes, but these are the main four. 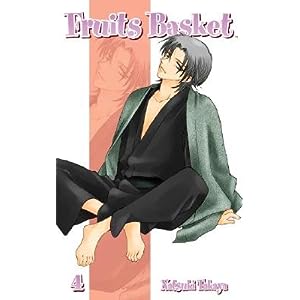 Chinese Zodiac Cat and Rat Story
This classic tale explains the animosity between Yuki (the cunning rat) and Kyo (the tricked cat). My favorite part about Fruits Basket is learning about the Zodiac.
The Rat and the Cat were once best friends. They were inseparable. One day, the Cat learned that the Jade Emperor was going to name twelve animals to represent the twelve calendar years. Of course, he immediately told his best friend, the Rat. He was excited to go to the Emperor with the Rat.
On the day of the meeting with the Emperor, the Cat wanted to be at his best. He took a nap beforehand in order to be well-rested. He asked the Rat to wake him in time to get to the palace. The Rat assured him he would.
But the Rat was greedy and ambitious. He wanted to be among the twelve animals and thought that the Emperor would surely pick the Cat over him. So he snuck off to meet the Emperor and became one of the twelve Zodiac animals.
When the Cat learned of the Rat's betrayal, he was livid. The Cat and Rat became bitter enemies. The Cat swore to the end of his days that he would best the Rat. And to this day, all cats are enemies with all rats.
Review
This was definitely a great choice for my first manga. The plot is unique and drew me in quickly. Other than looking at the zodiac calendar at my local Chinese restaurant, I knew nothing about the zodiac. This was a great introduction to the mythology. I really liked the story about how the cat was tricked by the rat and kept him out of the 12 zodiac animals. I also loved seeing how each character's corresponding animal influences his or her personality.
Takaya-sensei keeps the plot moving. It would be easy to get bogged down in this series and annoyed with the characters. Tohru is so optimistic, sweet, and self-sacrificing that she could easily drive me up the wall. Yuki and Kyo keep having the same fruitless fight over and over. But Fruits Baskets never gets boring. Each volume introduces us to new members of the Sohma family and takes us further into the Zodiac mythology. The daily activities of school, yearly holidays, and family politics are enough to hold my interest.
It took me a volume or two to get used to the style of manga. Everything is very dramatic. It reminds me of how theater actors have to make all their expressions and movements bigger. Manga has to work a little harder to make up for the lack of words. It was hard to visually distinguish anger from sadness from embarrassment by just looking at the pictures. Maybe it's easy for other people, but it wasn't for me. Also, manga authors like having little side notes in the margin - usually one or two per chapter. Takaya-sensei's notes have nothing to do with the book. She likes talking about her favorite video games. It's fun to read these little comments. I feel like I get to know the author a bit, but it was confusing at first.


The artwork is beautiful. Each character is drawn in great detail. Takaya-sensei especially shines with eyes and hair. I am green with envy over the straight, shiny, perfectly coiffed hair of each character. The background is simple or non-existent. The pictures really focus on the characters and their facial expressions to move the plot along.
All in all, Fruits Basket is a terrific introduction to manga. It's a fun read and leaves me itching for more. I'll provide more reviews of the series as I continue with it...perhaps every 5 volumes or so.
Rating: 4 / 5
Posted by Alison Can Read at 5:07 PM