I nearly made it 30 years (28 to be specific...very different than 30), without touching manga. That was before my husband and I went to Japan in April. It was a fabulous trip. My husband is fluent in Japanese and lived there for several years. We spent a week and a half traveling around the country visiting all his Japanese friends. We went to Nagoya, Osaka, Nara, Kyoto, Takasaki, Niigata, and Tokyo. I ended the trip with a vocabulary of about 50 or 60 words. I could basically communicate on the level of a 2 year old.

I've been interested in Asian culture and particularly Japanese culture for several years. Visiting Japan made me even more curious about all things Japanese. I decided to dip my hands into manga. 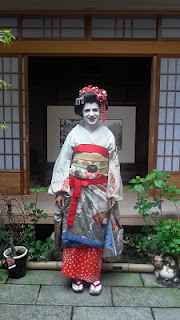 Me in full geisha regalia in Kyoto 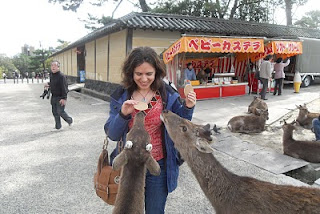 Feeding the deer in Nara


Manga is basically the Japanese word for comics or graphic novels. Manga can be traced back to traditional Japanese art and storytelling, particularly a style that began in the 1800s. It really got started in the form that we recognize today after World War II.

Manga is massively popular in Japan, as well as other parts of Asia. People of all ages read it. It is increasingly popular in the United States, Canada, and Europe.

Books of manga are read right-to-left in the traditional Asian style. Most American/Western publishers honor this format. It took me about half a book to get used to it and then it seemed quite natural. Manga is also published in volumes. It is not uncommon for a manga serial to have 10-20 volumes, each comprising several chapters of the story. In Japan, manga is typically published in magazine format. It is republished in paperback after the series has established a following. I think most American manga is published in book form initially.


I'd like to take readers with me as I continue to explore the world of manga. Future posts will give more background of manga. I'll also give reviews of various manga series. So far, I've only read three series. I liked two of them and want to read all the volumes. One I didn't like as much and didn't get past the first volume.

I mostly plan to stick to shojo manga, because those are the types of stories I love best. I may also try shonen manga. I definitely plan to steer clear of seinin and seijin manga.
Posted by Alison Can Read at 10:33 PM