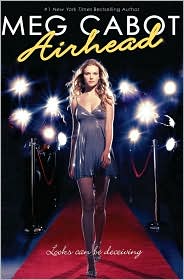 Em is considerably more interested in playing computer games with her friend Christopher than in befriending the A-list girls who rule her high school. A freak accident mortally injures Em and leaves superstar model Nikki brain dead. After a transplant operation, Em wakes up in Nikki’s body and learns that she must keep her identity a secret and live her life as Nikki. Readers who are willing to swallow the brain transplant idea will find that the rest of the story goes down easily enough; there’s plenty to entertain readers with stars in their eyes as well as those who disdain the pop-culture glamour of Nikki’s life. Besides the juxtaposition of Em’s world with Nikki’s, there are elements of humor and glimmers of compassion for the rich and famous in this first-person story. Toward the novel’s end, “Nikki” enrolls in Em’s old school. Can the girl inside that too-perfect body reconnect with the boy she secretly loves? Stay tuned. (summary from Amazon).

I put off reading this book for a long time since I assumed that it would be stupid. But I heard lots of great reviews and succumbed to my curiosity. I wouldn't say I loved the book, but it was interesting enough that I want to read the rest of the books. The book is basically a series of pro's and con's for me:

The plot is definitely unique - the idea of someone swapping out the brain of a regular girl into the body of a supermodel is super-weird. But Meg Cabot handles weirdness well. I was never distracted by how out-there the books' premise was. Instead, I was fascinated by the basic plot and the cast of characters. Lulu, Nikki's best friend, was hilariously flighty and Cosabella was an adorable dog. Gabriel Luna was a great character - handsome both inside and out. I didn't feel like Em's parents were well-developed. I know that they were both professors and that her mother was a die-hard feminist, but otherwise, they were just kind of there. Frida, Em's little sister, was an interesting girl - striving to be popular.

The book introduces us to the main antagonist, Stark Enterprises, but doesn't get into too much detail. That's clearly left for future books. We learn just enough to keep us interested.

My chief problem with this book was Emerson. I didn't like her. I thought she was shallow, self-absorbed, and arrogant. Everything revolved around her. She didn't like anyone at school except for Christopher, and even he was flawed because he didn't return her love. After she had her brain transplant, she displayed a real lack of concern about her family's feelings - it was all Em this and Em that. Granted, she was motivated to keep quiet by Stark's threat to her family, but I still didn't get many caring vibes from her. Her black and white view of the world was really annoying - it's feminism or bust. Popular girls are evil. Cheerleaders are evil. Models and celebrities are evil.

In some ways, being turned into Nikki Howard may be the best thing that could have happened to Emerson. Toward the end of the book, we see a few shards of empathy break through her conceited shell. Popular kids may have some depth after all. And even if some people, like Lulu, have no depth at all, they may still be fun to hang out with and have a heart of gold. I see potential for growth in Emerson and look forward to seeing her develop in future books.