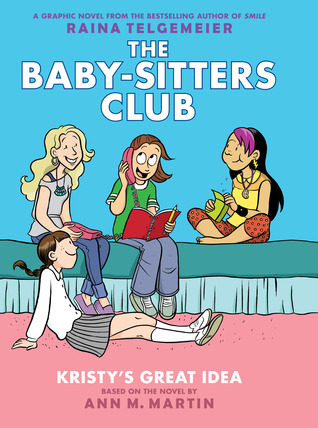 Kristy, Mary Anne, Claudia, and Stacey are best friends and founding members of The Baby-sitters Club. Whatever comes up -- cranky toddlers, huge dogs, scary neighbors, prank calls -- you can count on them to save the day. But baby-sitting isn't always easy, and neither is dealing with strict parents, new families, fashion emergencies, and mysterious secrets. But no matter what, the BSC have what they need most: friendship.

Raina Telgemeier, using the signature style featured in her acclaimed graphic novels SMILE and SISTERS, perfectly captures all the drama and humor of the original novel! (courtesy of Goodreads)

Normally when I hear that a favorite book is going to be adapted into a graphic novel, I'm anxious that the artist won't do the story justice. When I heard that Raina Telgemeier was going to adapting the Babysitters Club though, my expectations were sky high. I've read all three of Raina's original graphic novels and adored them. Fortunately, my expectations were well met.

A comic version (I was going to say 'graphic version' but that makes it sound X-rated) of Kristy's Great Idea naturally appeals to those of us who grew up with The Babysitters Club, but I think that kids today will also love it. Raina did a great job of giving the illustrations a timeless feel. Thankfully, they weren't altered to be in present day as I believe they did for a re-release of a print version recently. Giving the BSC members cell phones and computers is an anathema to my beloved series. For the most part this story could be set in any time. The only thing that marks it as different from present day is the corded phone that's in Claudia's room.

I was particularly impressed with how complete the drawings were. I mean this in the sense that a relatively short book with relatively little dialogue told the entire story of Kristy's Great Idea. I've read this book a bunch of times (although it's been at least 20 years) and I feel like it included everything I remembered.

The drawings allow the characters' emotions to be portrayed even better than they were in the books. I felt like Kristy's anguish over her mom's relationship with Watson was more palpable in the graphic novel, because I could see her physical reaction. Kristy's character also came through loud and clear with her high activity, her impulsiveness, and her outspoken nature. Similarly the emotions involved in the subplot of Stacey hiding her diabetes was clearly laid out on all the characters' faces - Stacey with her awkward attempts to hide her illness and Kristy, Mary Anne, and Claudia's confusion and hurt over being lied to.

This graphic novel was actually released almost 9 years ago, but this is the first time it's been in full color. That makes a huge difference, I think. I vaguely recall looking at it when it was first released and I wasn't nearly as impressed as I am now with color illustrations. I think it looks and sounds fresh enough for a whole new generation to fall in love with The Babysitters Club. Let's hope!

Recommendation: Totally buy! And give to middle grade readers.