We Should Hang Out Sometime: Embarrassingly, a true story by Josh Sundquist 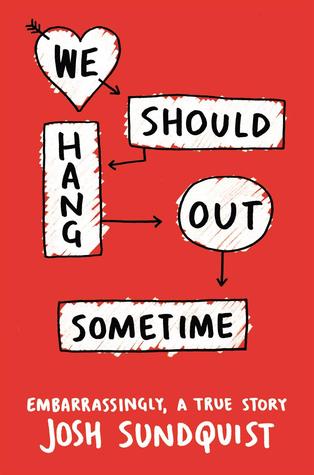 We Should Hang Out Sometime: Embarrassingly, a true story by Josh Sundquist

Josh Sundquist only ever had one girlfriend.
For twenty-three hours.
In eighth grade.


Why was Josh still single? To find out, he tracked down the girls he had tried to date and asked them straight up: What went wrong?

The results of Josh's semiscientific, wholly hilarious investigation are captured here. From a disastrous Putt-Putt date involving a backward prosthetic foot, to his introduction to CFD (Close Fast Dancing), to a misguided "grand gesture" at a Miss America pageant, this story is about looking for love--or at least a girlfriend--in all the wrong places. (courtesy of Goodreads)

We Should Hang Out Sometime is a funny memoir about an awkward boy's even more awkward attempt and failure at dating. The book itself is a bit awkward since it features him recounting each failed potential relationship and goes back to the girl in question to ask her memories years later. It's a quick, fun read.

Geeky is the new sexy these days. Pretty much ever celebrity claims to have been a big nerd when they were young. Sometimes I think that was true and sometimes it definitely wasn't. Josh Sundquist appears to have been and still to be a geek. Someone who overanalyzes himself and relationships to the point of inevitable doom. We benefit from Josh's overanalysis, because that's all this book is - complete with numerous ven diagrams and graphs to add to the nerdiness and up the book's coolness factor.

What Josh principally appears to be, apart from a geek, is a very nice guy. He is also an amputee, which is an important part of his character. This could easily have been a woe-is-me, people won't date me because I only have one leg story, but it was not. Actually, I think Josh at one time believed that his leg was the reason he didn't have a girlfriend but through the analysis leading to this book, he discovered that it was his personality's fault, not his leg.

Awkwardness abounds! Josh lays out his dating life with a variety of different anecdotes and interviews. Many of these are laugh-out-loud funny as Josh does a lot of well-intentioned but stupid things. Honestly, I probably wouldn't have dated him, although I was equally awkward in a different way. In the process of telling his story, you also get a good feel of Josh's teenage life. He was fortunate to have a wonderful family and lots of supportive friends. Apart from losing his leg (which is very sad), Josh is a lucky boy. Even though he doesn't get the girls, his life is very happy. It's a pleasant change to read about happy people after the drama of so many YA novels.

One thing I noticed in reading other reviews that were critical of this book was that many other readers were put off by the inherent misogyny in Josh's attempts to "hunt" girlfriends and then what appears to be dropping their friendships entirely after they didn't date him. I didn't get that feeling while reading it, but I also understand why other readers felt that way. The only thing that bothered me was imagining myself as one of those girls and how I probably wouldn't have wanted to be interviewed years later and featured in a book.

We Should Hang Out Sometime is indeed an embarrassing true story. It is also a kind true story though. Basically everyone comes off in this story as a nice person. Josh makes himself seem like a nerdy, cool guy and doesn't throw anyone under the bus. It reads like a well-written, funny account of typical teenage failures. Definitely something for a quick read.

Powell's Books (Support an Indie Bookstore!)
Posted by Alison Can Read at 12:10 AM