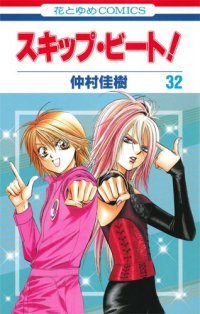 Ren's trademark cool is beginning to crumble under the strain of maintaining his various personas. And the sudden manly attention being directed at Kyoko from fellow actor Kijima and a newly determined Sho aren’t helping matters. Will Kyoko’s good luck charm keep him in check, or will the beast chained inside him destroy them all?! (courtesy of Goodreads)


Skip Beat is probably my favorite manga, but I waited quite awhile before reading the latest volume. Just as well. Now I have less time to wait before the next volume comes out (September, I think).

In some ways, each volume of Skip Beat lately has been more of the same. Basically tons of romantic tension. This is somewhat frustrating. It's annoying that I'm reading the same plot over and over with a few details changed, but on the other hand, books/tv shows/movies are almost always better before the happy couple gets together. The romantic tension is what moves things. So I'm also not in too much of a hurry for things to change.

The basic plot of this volume is Sho snatching Kyoko from school and hassling her. Ren sees them together in a car and is both curious and jealous about whatever it is they're doing. Every time that Sho hints that he might not be a terrible person is short-lived; soon enough he does something skeevy. His watchfulness of Kyoko is much more possession than protection. Ren too has a jealous side and there's a possession element to it as well, but it just doesn't feel as slimy.

Kyoko has started to figure out that she "likes" Ren, but is still convinced that he has no interest in her. This is the plot element that really irritates me. I hate that she is so blind. That she doesn't have the self confidence to think that Ren might be interested in her. For a girl that is very strong in so many ways, she is remarkably weak when it comes to self-perception. I hope that changes soon.