No Matter How I Look at It, It's You Guys' Fault I'm Not Popular! vol. 1 by Nico Tanigawa 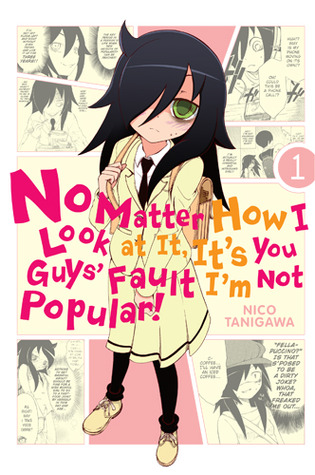 As a middle schooler, Tomoko Kuroki dreamed of making her high school debut as the most popular girl in school. But all of her experience playing video game dating simulations may have backfired. Instead of preparing her for the real world, her gaming has kept her from it for so long that even the most mundane human interactions have become a stumbling block! How can she impress her classmates when she can't even speak to them?! (courtesy of Goodreads)


I'm always game for a new manga series. Especially one with such a weirdly funny title. Unfortunately this one is not for me.

I wouldn't be friends with Tomoko either. She would have a much greater chance of making friends if she actually bothered to talk to anyone. This isn't entirely Tomoko's fault. She clearly has some kind of anxiety disorder or a clinical level of shyness.

I switched back and forth while reading the volume between pitying her and hating her. Because while Tomoko clearly has some big mental problems, she's also bitter. I like a snark main character as much as the next reader, but there's a fine line between sarcasm and sourness. Tomoko leapt over that line within the first chapter and never looked back. She wasn't funny. She was unpleasantly bitter. It made me lean much closer to hate than pity, which translated into how I felt about the manga overall.