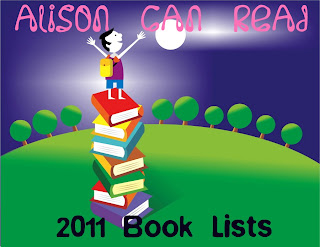 
I didn't begin reading book blogs until early 2010. One of the first blogs that I fell in love with was Steph Su Reads. What impressed me more than anything else on her blog was her incredibly extensive 2009 Book Lists (also check out her 2010 Book Lists). There were dozens (maybe a hundred) books mentioned, separated into every category a reader could think of. These lists were so helpful to me. I think I've about ten books based on her lists alone. I started my blog in June 2010 partially because I was so inspired by Steph's blog and her book lists. So it's only fitting that I now do my own lists.

What are the Book Lists?

My book lists are not a "best of" list, with the exception of categories like Best Romance, Best Writing, and Top Ten. I took almost all the books I read this year and split them into a variety of categories. Many of the books will be repeated on several lists. I enjoyed all of the books on the list, but my feelings toward them vary widely. The lists contain my favorite books of the year, but also books that I thought were just okay. They contains several that I can barely remember a few months after I read them. All of them received at least a 3 star rating, because I usually don't finish books that rate lower than that.

The purpose of the lists is to learn a little bit about a whole bunch of books. If you're looking for a book that fulfills certain criteria, these lists should be helpful. My hope is that you will discover a ton of new books to read.

I really hope you love these posts. Partly because I've spent A LOT of time preparing them. I'd say at least 40 hours of work. Empty flattery will be welcomed. :-) Luckily, I was smart this year. I started working on the lists in September. By November, I was spending a few hours a day on them. It's the most time consuming blog project of the year, but also my favorite.

A lot of the books in the lists do not have reviews posted on my blog yet. As I post them, I will update the lists. I would like this to be a resource that readers can come back to all year long, not just in December.

The Lists are split into seven posts:

1. Contemporary Fiction - This category is so big that it gets its own post